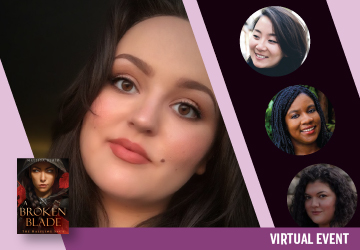 Conceived as a love letter to BookTok’s avid fantasy community, and drawing from her own experiences as an indigenous woman, Melissa Blair’s A Broken Blade is a gripping, action-packed story of anti-colonialism, rebellion, and heart.

In celebration of the launch of Melissa Blair’s A Broken Blade, please join us for a virtual panel about the importance of revolting against the colonial structures often prevalent in science fiction/fantasy! Our panel will feature Marie Lu and Zoraida Cordova.

Please note: Rosanne A. Brown, previously scheduled to attend this panel, is no longer able. We apologize for any inconvenience.

My body is made of scars,
some were done to me,
but most I did to myself.

Keera is a killer. As the King's Blade, she is the most talented spy in the kingdom. And the king’s favored assassin. When a mysterious figure moves against the Crown, Keera is called upon to hunt down the so-called Shadow.

She tracks her target into the magical lands of the Fae, but Faeland is not what it seems. . .and neither is the Shadow. Keera is shocked by what she learns, and can't help but wonder who her enemy truly is: the King that destroyed her people or the Shadow that threatens the peace?

As she searches for answers, Keera is haunted by a promise she made long ago, one that will test her in every way. To keep her word, Keera must not only save herself, but an entire kingdom.

Melissa Blair (she/her/kwe) is an Anishinaabe-kwe of mixed ancestry living in Turtle Island. She splits her time between Treaty 9 in Northern Ontario and the unceded territory of the Algonquin Anishinabeg in Ottawa, Canada. She has a graduate degree in Applied Linguistics and Discourse Studies, loves movies, and hates spoons. Melissa has a BookTok account where she discusses her favorite kinds of books including Indigenous and queer fiction, feminist literature, and non-fiction. A Broken Blade is her first novel. Find her on TikTok @melissas.bookshelf.

Marie Lu is the #1 New York Times–bestselling author of the Legend series, The Young Elites trilogy, the Warcross series, the Skyhunter series, Batman: Nightwalker, and The Kingdom of Back. She graduated from the University of Southern California and jumped into the video game industry, where she worked as an artist. A full-time writer, she spends her spare hours reading, drawing, playing games, and getting stuck in traffic. She lives in the traffic-jam capital, Los Angeles, with her illustrator/author husband, Primo Gallanosa, and their son.

Roseanne A. Brown is an immigrant from the West African nation of Ghana and a graduate of the University of Maryland, where she completed the Jiménez-Porter Writers’ House program. Her work has been featured by Voice of America, among other outlets. Her debut novel, A Song of Wraiths and Ruin, was an instant New York Times bestseller. She currently lives outside Washington, DC. You can visit her online at roseanneabrown.com. (Photo credit: Ashley Hirasuna)

Zoraida Córdova is the acclaimed author of more than a dozen novels and short stories, including the Brooklyn Brujas series, Star Wars: Galaxy’s Edge: A Crash of Fate, and The Inheritance of Orquídea Divina. In addition to writing novels, she serves on the Board of We Need Diverse Books, and is the co-editor of the bestselling anthology Vampires Never Get Old, as well as the cohost of the writing podcast, Deadline City. She writes romance novels as Zoey Castile. Zoraida was born in Guayaquil, Ecuador, and calls New York City home. When she’s not working, she’s roaming the world in search of magical stories. For more information, visit her at zoraidacordova.com.