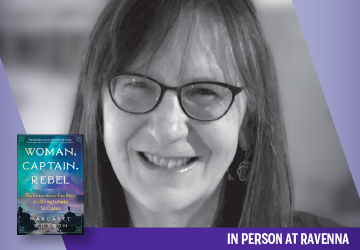 A notorious crime, a lone woman fighting for equality, and the thrills of the wide-open sea

Third Place Books welcomes anthropologist and writer Margaret Willson for a discussion of her stunning account of Iceland's most famous female sea captain, Woman, Captain, Rebel: The Extraordinary True Story of a Daring Icelandic Sea Captain. This event is free and open to the public. Registration is required in advance.

This event will include a public signing and time for audience Q&A. Sustain our author series by purchasing a copy of the featured book!

A daring and magnificent account of Iceland's most famous female sea captain who constantly fought for women's rights and equality—and who also solved one of the country's most notorious robberies.

Many people may have heard the old sailing superstition that having women onboard a ship was bad luck. Thus, the sea remains in popular knowledge a male realm. When we think of examples of daring sea captains, swashbuckling pirates, or wise fishermen, many men come to mind. Cultural anthropologist Margaret Willson would like to introduce a fearless woman into our imagination of the sea: Thurídur Einarsdóttir.

Captain Thurídur was a controversial woman constantly contesting social norms while simultaneously becoming a respected captain fighting for dignity and equality for underrepresented Icelanders. Both horrifying and magnificent, this story will captivate readers from the first page and keep them thinking long after they turn the last page.

"Meticulously researched and evocatively written, Woman, Captain, Rebel provides not only a captivating insight into 19th-century Iceland, but also introduces readers to the inspirational, real-life fishing captain Thurídur, a tough and fiercely independent woman who deserves to be a role model of determination and perseverance for us all."
—Eliza Reid, internationally bestselling author of Secrets of the Sprakkar

"A chance encounter on a windswept isle. A weathered plaque in an ancient community that revealed a secret. Then the door opened up to the past and the story came tumbling out, saved by the Icelandic storytelling tradition. As the author says, learning about Thurídur, an 19th century fishing captain changed her life. Reading about this remarkable woman's journey will challenge your ideas about history and change yours too."
—Major General Mari K. Eder, author of The Girls Who Stepped Out of Line

"Thurídur started fishing at age nine, wearing trousers that were forbidden to her gender. She became a captain in a profession where there were no women, successfully advocated for herself and other women using the courts, and proved herself to be a detective in a long unsolved case. Reading about Thurídur gives a glimpse into the harsh and sometimes cruel history of a country not so far away."
—Booklist

Anthropologist and writer, Margaret Willson has traveled extensively, in Brazil, Papua New Guinea, Mongolia, Australia, Europe and Iceland. Her eclectic nonacademic jobs have included abalone diving and being a deckhand on fishing boats off the south coast of Tasmania. She received her Ph.D. in Anthropology from the London School of Economics and is currently an Affiliate Associate Professor with the Departments of Anthropology and Scandinavian Studies at the University of Washington, and a Senior Associate Scientist at the Stefánsson Arctic Institute in Iceland. Her previous books include Seawomen of Iceland: Survival on the Edge and Dance Lest We All Fall Down: Breaking Cycles of Poverty in Brazil and Beyond. She lives in Seattle with her partner and their cat Mister. (Photo credit: James Eng)