Livestream Event: Cicely Tyson (with Special Guests) - Just As I Am 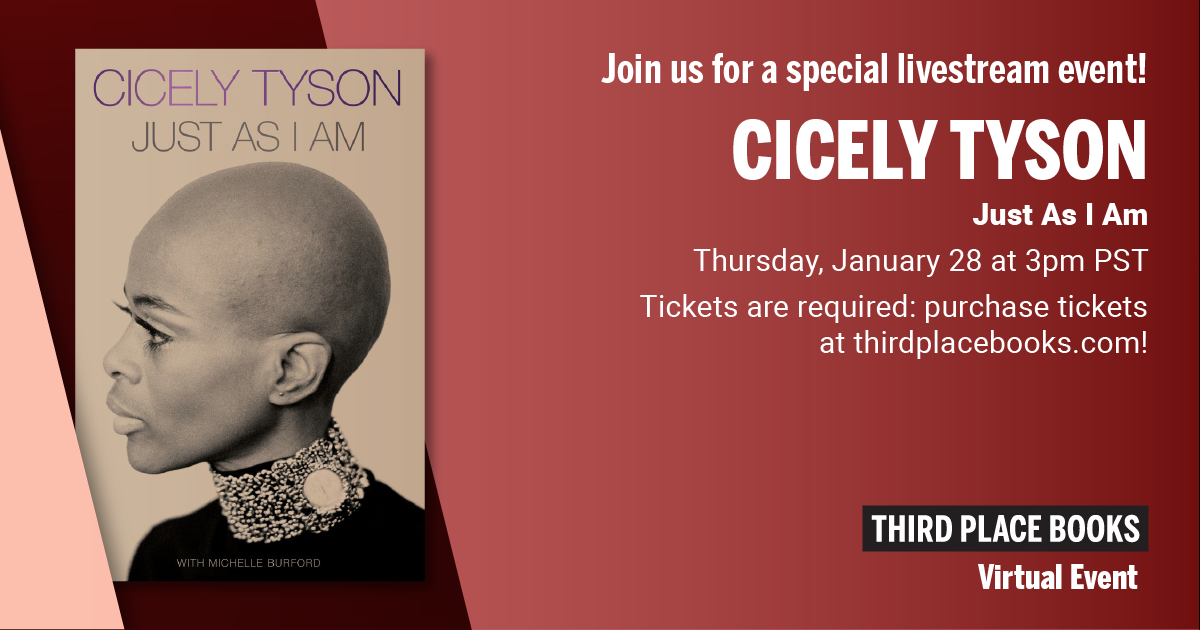 This is a virtual event, and tickets are required! Ticket includes one copy of Just As I Am.* Purchase Tickets Here!

"In her long and extraordinary career, Cicely Tyson has not only succeeded as an actor, she has shaped the course of history." -President Barack Obama, 2016 Presidential Medal of Honor ceremony

"Just As I Am is my truth. It is me, plain and unvarnished, with the glitter and garland set aside. In these pages, I am indeed Cicely, the actress who has been blessed to grace the stage and screen for six decades. Yet I am also the church girl who once rarely spoke a word. I am the teenager who sought solace in the verses of the old hymn for which this book is named. I am a daughter and mother, a sister, and a friend. I am an observer of human nature and the dreamer of audacious dreams. I am a woman who has hurt as immeasurably as I have loved, a child of God divinely guided by His hand. And here in my ninth decade, I am a woman who, at long last, has something meaningful to say." -Cicely Tyson

Join Third Place Books, along with partners from around the country, for a special livestream event with Cicely Tyson!

Miss Cicely Tyson is an actress, lecturer, activist, and one of the most respected talents in American theater and film history. From her starring role on Broadway in The Blacks (1961), to the Emmy-nominated 1999 HBO film A Lesson Before Dying, her work has garnered critical and commercial applause for more than sixty years. Her two Emmys for The Autobiography of Miss Jane Pittman made her the first African-American woman to win an Emmy for Best Actress. In 2013, Miss Tyson won the Tony Award for Best Actress in a Play for her performance as Miss Carrie Watts in The Trip to Bountiful. A capstone achievement came in 2018, when she became the first Black woman to receive an honorary Oscar. The Board of Governors voted unanimously to honor her with the award, which came 45 years after her Academy Award nominated performance in Sounder.

*Books will be shipped to purchasers via USPS Media Mail. Please note that Third Place Books DOES NOT OFFER INTERNATIONAL SHIPPING.