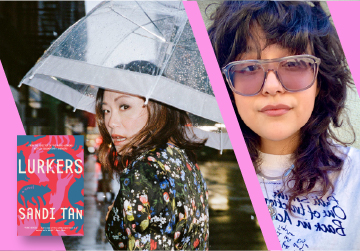 From author and filmmaker Sandi Tan, director of the acclaimed documentary Shirkers, comes a novel about a neighborhood of immigrants, seekers, lovers, and lurkers.

The residents of Santa Claus Lane do their best to stay out of each other's way, but desire, fury and mischief too often propel these suburban neighbors to collide. Precocious Korean American sisters Mira and Rosemary find their world rocked by a suicide, and they must fight to keep their home; a charismatic and creepy drama teacher grooms his students; a sardonic gay horror novelist finds that aging is more terrifying than any monster; and a white hippie mom and her adopted Vietnamese daughter realize that their anger binds them rather than pushes them apart. Lurkers is an homage to the rangy beauty of Los Angeles and the surprising power that we have to change the lives of those around us.

Sandi Tan was born in Singapore. She directed the Netflix film Shirkers, which won a Directing Award at the Sundance Film Festival, was named Best Documentary by the Los Angeles Film Critics Association, and was shortlisted for the Oscar for Best Documentary. The Black Isle was her debut novel. She's lived in Los Angeles for 20 years but everyone still thinks she lives in New York.

Roxie Rodriguez is Head of TV at Aggregate Films.