Live on Zoom! Ron Chew, in conversation with Sally Yamasaki - My Unforgotten Seattle 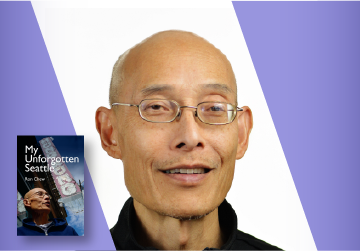 “Seattle would not have been the same without Ron Chew. This book will add to that legacy by deepening our understanding of the city.”—from the foreword by Carey Quan Gelernter

Ron Chew served as editor of the International Examiner and as executive director of the Wing Luke Museum of the Asian Pacific American Experience. His books include Reflections of Seattle’s Chinese Americans: The First 100 Years and Remembering Silme Domingo and Gene Viernes: The Legacy of Filipino American Labor Activism.

Sally Yamasaki has been a Lake Forest Park community member since 1960. Her roots from her father began in Seattle’s Nihonmachi, and Worland Wyoming from her mother.