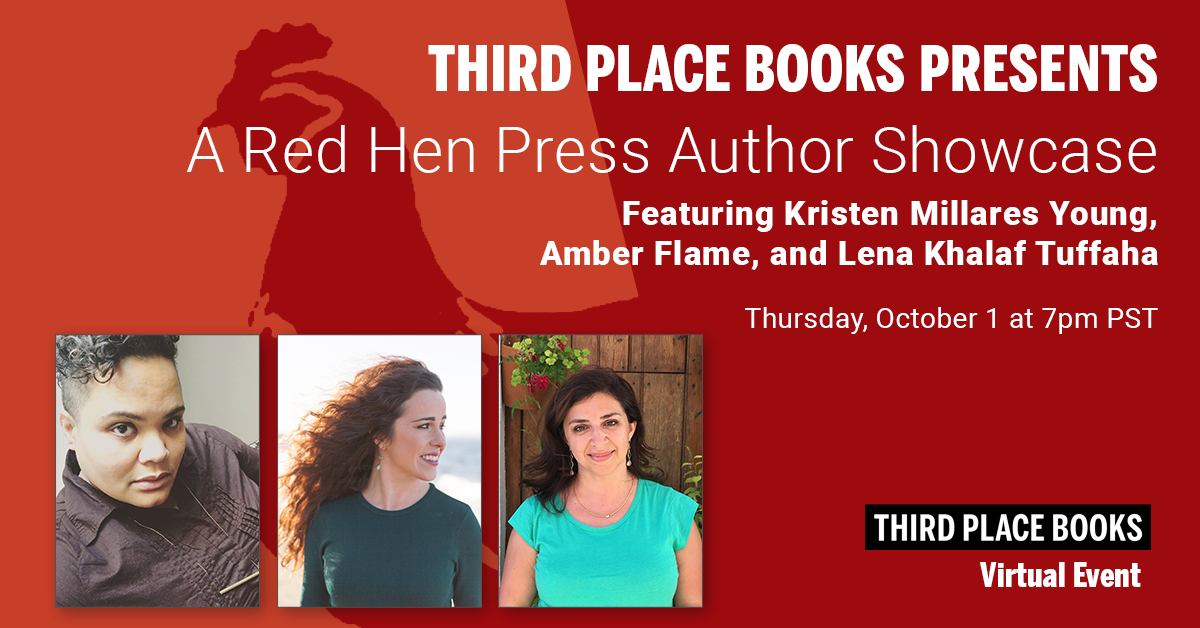 This is a livestream event, taking place via Zoom Webinar! Register for this event here!

Join us for an evening with three acclaimed Seattle-area writers, all published by Red Hen Press!

Kristen Millares Young is the author of the novel Subduction, a Paris Review staff pick called “whip-smart” by the Washington Post, a “brilliant debut” by the Seattle Times and “utterly unique and important” by Ms. Magazine. Her essays, investigations and reviews appear in the Washington Post, Literary Hub, the Guardian, and elsewhere, as well as the anthologies Latina Outsiders, Pie & Whiskey and Alone Together: Love, Grief, and Comfort During the Time of COVID-19. She was the researcher for the New York Times team that produced “Snow Fall,” which won a Pulitzer Prize. From 2018 to 2020, Kristen served as Prose Writer-in-Residence at Hugo House.

Amber Flame is a writer, composer and performer whose work has garnered artistic merit residencies with Hedgebrook, The Watering Hole, Vermont Studio Center, and Yefe Nof. Flame served as the 2017-2019 Poet-in-Residence at Hugo House. Her first collection, Ordinary Cruelty, was published in 2017 by Write Bloody Press, and her second collection is forthcoming from Red Hen Press.
Lena Khalaf Tuffaha is a poet, essayist, and translator. Her first book of poems, Water & Salt won the Washington State Book Award and was a finalist for the Arab American Book Awards. Her chapbook, Arab in Newsland, won the 2016 Two Sylvias Press Prize, and her most recent chapbook, Letters from the Interior, was published by Diode editions. Her poems and essays have received the Robert Watson Literary Prize and been published in Adroit journal, Jubilat, Kenyon Review Online, the New England Review, the Rumpus, Southern Humanities Review, and World Literature Today, among others.
Third Place Books Events Code of Conduct: Third Place Books is committed to ensuring the safety and well-being of event attendees and guest authors, during both online and in-store events. By registering for this event, you are agreeing to refrain from engaging in inappropriate behavior and harassment of any kind throughout the course of this event (i.e. racial slurs, profanity, hate speech, spam comments, etc.). Please note that any participants who engage in inappropriate behavior or harassment of any kind will be immediately ejected from this event.