Virtual Event: Rachel Lynn Solomon in conversation with Emily Wibberley and Austin Siegemund-Broka — We Can't Keep Meeting Like This 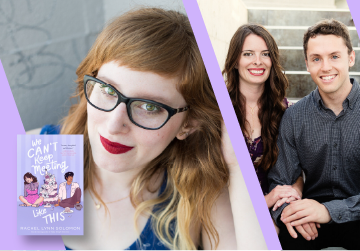 Third Place Books welcomes YA novelist Rachel Lynne Solomon for the launch of her latest book, We Can't Keep Meeting Like This. She will be joined in conversation by Emily Wibberley and Austin Siegemund-Broka, the authors of What's Not To Love.

A wedding harpist disillusioned with love and a hopeless romantic cater-waiter flirt and fight their way through a summer of weddings in this effervescent romantic comedy from the acclaimed author of Today Tonight Tomorrow.

Quinn Berkowitz and Tarek Mansour’s families have been in business together for years: Quinn’s parents are wedding planners, and Tarek’s own a catering company. At the end of last summer, Quinn confessed her crush on him in the form of a rambling email—and then he left for college without a response.

Quinn has been dreading seeing him again almost as much as she dreads another summer playing the harp for her parents’ weddings. When he shows up at the first wedding of the summer, looking cuter than ever after a year apart, they clash immediately. Tarek’s always loved the grand gestures in weddings—the flashier, the better—while Quinn can’t see them as anything but fake. Even as they can’t seem to have one civil conversation, Quinn’s thrown together with Tarek wedding after wedding, from performing a daring cake rescue to filling in for a missing bridesmaid and groomsman.

Quinn can’t deny her feelings for him are still there, especially after she learns the truth about his silence, opens up about her own fears, and begins learning the art of harp-making from an enigmatic teacher.

Maybe love isn’t the enemy after all—and maybe allowing herself to fall is the most honest thing Quinn’s ever done.

“For the hopeless romantics, and for the ones who wish they could be, We Can’t Keep Meeting Like This will keep you well fed. The sort of book that leaves you feeling better about the world than you did before you began, you’ll want to pick this one up for the lovable characters, Solomon’s trademark tender focus on family, and the heartfelt exploration of what it means to be truly vulnerable.”
—Sophie Gonzales, author of Only Mostly Devastated and Perfect on Paper

“Brimming with wit and charm, We Can’t Keep Meeting Like This is a refreshingly honest exploration of what makes a healthy relationship—both familial and romantic. Rachel Lynn Solomon is an auto-buy author!”
—Cameron Lund, author of The Best Laid Plans

“Equal parts swoony and thoughtful and hilarious—a truly perfect recipe for love. Come for this book’s delicious cake and hilarious banter, stay for its insightful look at relationships and big heart.”
—Emma Lord, New York Times bestselling author of Tweet Cute and You Have a Match

Rachel Lynn Solomon is the author of You’ll Miss Me When I’m Gone, Our Year of Maybe, Today Tonight Tomorrow, and We Can’t Keep Meeting Like This. She is a Seattle native who loves rainy days, her tiny dog, tap dancing, old movies, red lipstick, and books with flawed, complicated characters. Learn more at RachelSolomonBooks.com.