Live on Zoom! Marty Wingate & Danielle Martin - Glamour Girls & Glimmer As You Can 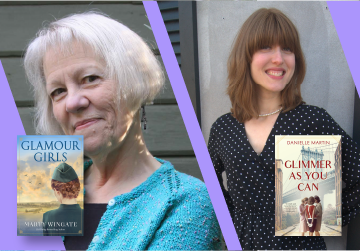 During World War II, farmer's daughter Rosalie Wright becomes a pilot assisting the RAF. But will a romantic rivalry send her aerial dreams plummeting to earth? Ever since she was 10 years old, Rosalie Wright's eyes have been on the skies. But at the age of 18, on the verge of earning her pilot's license, the English farmer's daughter watches her dreams of becoming an aviatrix fly away without her. Britain's entry into World War II brings civilian aviation to a standstill. Then, Rosalie's father dies, leaving her, her mother, and her brothers to run the farm. Everything changes when she learns that the Air Transport Auxiliary is recruiting women pilots to ferry warplanes across Britain to RAF bases. Despite her mother's objections, Rosalie cannot resist the call of her country--and the lure of the skies. During her training on Gipsy Moth aircraft, Rosalie forms a fast friendship with fellow flyer Caro Andrews. Her trusty Ferry Pilots Notebook by her side, Rosalie delivers to five airfields in a day—while fighting an endless battle against skeptical male pilots and ground crews.

She would much rather spend her time on the wing than on the arm of any man...until she meets gruff pilot Snug Durrant and RAF squadron leader Alan Chersey. Snug is a cynical, wisecracking playboy, and Alan is every WAAF's heartthrob ... and Rosalie catches both their eyes. As the war drags on, and casualties mount, will love and tragedy send Rosalie's exhilarating airborne life crashing to the ground?

1962. In the middle of Brooklyn Heights sits the Starlite: boutique dress shop by day, underground women’s club by night. Started by the shop’s proprietor after her marriage to a prominent councilman crumbled, Madeline’s social club soon becomes a safe haven for women from all walks of life looking for a respite from their troubled relationships and professional frustrations. These after-hour soirées soon bring two very different women into Madeline’s life—Elaine, a British ex-pat struggling with an unpredictable fiancé, and Lisa, a young stewardess whose plans for the future are suddenly upended—irrevocably changing all three women’s lives in ways no one could have predicted. But when Madeline’s ne’er-do-well ex-husband shows up again, the luster of Starlite quickly dampens. As the sisterhood rallies around Madeline, tension begins to eat at the club. When an unspeakable tragedy befalls their sorority, one woman must decide whether to hide the truth from the group or jeopardize her own hopes and dreams. Glimmer As You Can captures the heartbeat of an era and the ambitions of a generation of women living in a man’s world—a world threatened by a wave of change.

USA Today best-selling author Marty Wingate's latest book is the historical fiction novel Glamour Girls (Alcove Press), which follows Spitfire pilot Rosalie Wright through both the physical and emotional dangers of the Second World War. Marty also writes The First Edition Library series (Berkley) set in Bath, England, about the curator of a collection of books from the Golden Age of Mystery. In book two, Murder Is a Must, an exhibition manager is found dead at the bottom of a spiral staircase—a la Dorothy L. Sayers. Marty also writes two further mystery series: the Potting Shed and the Birds of a Feather books.Marty prefers on-the-ground research whenever possible, and so she and her husband regularly travel to England and Scotland, where she can be found tracing the steps of her characters, stopping for tea and a slice of Victoria sponge in a café, or enjoying a swift half in a pub.

Danielle Martin started her professional career as an assistant with the William Morris agency before pursuing a degree in teaching. She previously worked as a special education teacher in New York, Pennsylvania, and Louisiana. Currently she works as a freelance writer near New Orleans. Born in Putnam County, NY and raised by two generations of native Brooklynites, her depictions of the boroughs of New York were informed by her childhood experiences, family accounts, and a love of city history.