Live on Zoom! Kevin Mattson, in conversation with Charles Cross - We're Not Here To Entertain 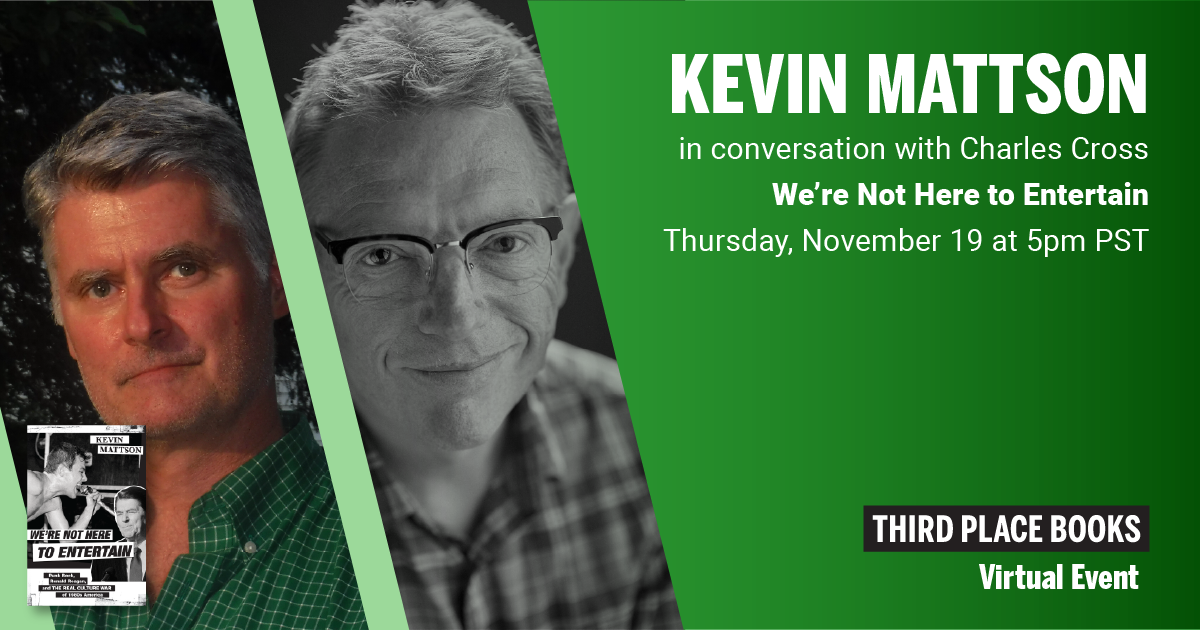 Many remember the 1980s as the era of Ronald Reagan, a conservative decade populated by preppies and yuppies dancing to a soundtrack of electronic synth pop music. In some ways, it was the "MTV generation." However, the decade also produced some of the most creative works of punk culture, from the music of bands like the Minutemen and the Dead Kennedys to avant-garde visual arts, literature, poetry, and film. In We're Not Here to Entertain, Kevin Mattson documents what Kurt Cobain once called a "punk rock world" --the all-encompassing hardcore-indie culture that incubated his own talent. Mattson shows just how widespread the movement became--ranging across the nation, from D.C. through Ohio and Minnesota to LA--and how democratic it was due to its commitment to Do-It-Yourself (DIY) tactics.

Throughout, Mattson puts the movement into a wider context, locating it in a culture war that pitted a blossoming punk scene against the new president. Reagan's talk about end days and nuclear warfare generated panic; his tax cuts for the rich and simultaneous slashing of school lunch program funding made punks, who saw themselves as underdogs, seethe at his meanness. The anger went deep, since punks saw Reagan as the country's entertainer-in-chief; his career, from radio to Hollywood and television, synched to the very world punks rejected. Through deep archival research, Mattson reignites the heated debates that punk's opposition generated in that era-about everything from "straight edge" ethics to anarchism to the art of dissent. By reconstructing the world of punk, Mattson demonstrates that it was more than just a style of purple hair and torn jeans. In so doing, he reminds readers of punk's importance and its challenge to simplistic assumptions about the 1980s as a one-dimensional, conservative epoch.

Kevin Mattson grew up in the suburban sprawl known as the Washington, D.C. Metropolitan Area. It was here that he first experienced the "punk rock world" that fuelled his formative years. He played in bands, wrote for zines, and became politically active, helping to cofound the organization Positive Force. He now teaches American history at Ohio University and is the author of numerous books that explore the intersection between culture and politics, including Upton Sinclair and the Other American Century and What the Heck Are You Up To, Mr. President?

Charles R. Cross is the author of nine books, including three New York Times bestsellers. His 2001 biography of Kurt Cobain, Heavier Than Heaven, has been published in 26 languages, and was called “One of the most moving and revealing books ever written about a rock star,” by the Los Angeles Times. Cross was Editor of The Rocket, the Seattle music magazine which helped launch and break the Grunge movement. He’s presently working on a memoir about parenting and rock ‘n’ roll.