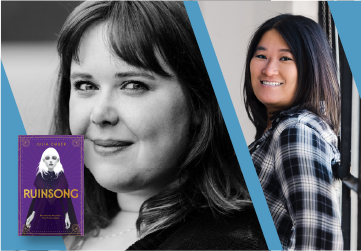 NEW DATE! Thank you for your patience as we recheduled this event!

In Julia Ember's dark and lush LGBTQ+ romantic fantasy Ruinsong, two young women from rival factions must work together to reunite their country, as they wrestle with their feelings for each other.

Her voice was her prison...
Now it's her weapon.

In a world where magic is sung, a powerful mage named Cadence has been forced to torture her country's disgraced nobility at her ruthless queen's bidding.

But when she is reunited with her childhood friend, a noblewoman with ties to the underground rebellion, she must finally make a choice: Take a stand to free their country from oppression, or follow in the queen's footsteps and become a monster herself.

Julia Ember was born in Chicago, but raised in London and Edinburgh. She now lives in Seattle with her wife, where they are the proud parents of two cats and a very fluffy pony. She has previously worked as a teacher, bookseller and wedding cake decorator, and she is also the author of the Seafarer's Kiss duology. When she isn’t working on her prose fiction, Julia writes for video and app games.
C.B. Lee is a Lambda Literary Award nominated writer of young adult science fiction and fantasy. Her works include the Sidekick Squad series (Duet Books), Ben 10 graphic novels (Boom! Studios), Out Now: Queer We Go Again (HarperTeen), Minecraft: The Shipwreck (Del Rey Books), From A Certain Point Of View: The Empire Strikes Back (Del Rey Books) and A Clash of Steel: A Treasure Island Remix (Feiwel and Friends). Lee’s work has been featured in Teen Vogue, Wired Magazine, Hypable, Tor’s Best of Fantasy and Sci Fi and the American Library Association’s Rainbow List.
Third Place Books Events Code of Conduct: Third Place Books is committed to ensuring the safety and well-being of event attendees and guest authors, during both online and in-store events. By registering for this event, you are agreeing to refrain from engaging in inappropriate behavior and harassment of any kind throughout the course of this event (i.e. racial slurs, profanity, hate speech, spam comments, etc.). Please note that any participants who engage in inappropriate behavior or harassment of any kind will be immediately ejected from this event.