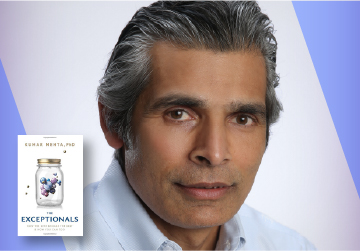 What does it take to be the best? To become an exceptional?

The Exceptionals are the few individuals who have achieved an unparalleled mastery in their field. They are the1% of the 1%.They have reached seemingly unreachable heights. They may be athletes or entertainers who are household names, or they may be people who have invented life-saving drugs or won a Nobel Prize by making fundamental advances in knowledge. Or they may have changed the world through science or music or business by influencing millions or perhaps billions of lives.

They are the people who have succeeded in being able to draw out the best talents they have within themselves and have maximized the physical, mental, and social potential available to them.

The Exceptionals is their story, and it provides you with the blueprint to advance yourself from good to great—and from to outstanding to elite.

Dr. Kumar Mehta is a noted expert on the science of exceptional performance. He is the bestselling author of The Exceptionals and the #1 bestseller, The Innovation Biome. Kumar’s extensive research with Olympic athletes, Nobel Laureates, world-renowned musicians, and people at the very top of many other fields has formed the basis of The Exceptionals. In addition to his research and writing, his professional experience includes nine years as the CEO of a large data analytics company and a fourteen-year stint at Microsoft. Dr. Mehta also serves as a Senior Research Fellow at the Center for the Digital Future at the University of Southern California. He is passionate about education and serves as Treasurer for the Committee for Children, a global nonprofit dedicated to fostering children’s safety and well-being through social-emotional learning and development. He holds a Ph.D. in pharmaceutical socioeconomics from The University of Iowa and lives in Seattle.

Gabe Jaramillo is a renowned international tennis coach who has worked with many of the greatest players in the sport’s history. He has trained eleven of the world’s No.1-ranked players and 27 top 10 players, including Andre Agassi, Jim Courier, Pete Sampras, Maria Sharapova, Monica Seles, Kei Nishikori, and many others. Gabe is the co-founder of Club Med Academies, an elite multi-sport academy that provides high-intensity skill development in tennis, golf, volleyball, soccer, and swimming. The center’s professional coaches and specialists work with some of the world’s top athletes, including gold medalists and world champions. From 1981 to 2009, Jaramillo also worked as the tennis director for the IMG Academy Bollettieri. For 26 consecutive years, Jaramillo coached players at all four Grand Slam events — the French Open, Wimbledon, the Australian Open, and the U.S. Open. Jaramillo has developed annual clinic tours and conferences for players, coaches, and parents in 32 countries. He has been an expert commentator on ESPN, FOX Sports, Euro Sports, Channel 10 Australia, Caracol Radio, Wowo TV Japan, and Grand Slam TV, served as a contributor to BBC Radio, and writes for several international magazines.

Kristine Lilly has been on the perennially top-ranked US Women’s National Soccer Team for over twenty-three years. She has represented the US in 354 matches, far more than any other player in the world, male or female. Lilly has played on five FIFA World Cups and three Olympic Games during her career, winning two gold medals and two world championships. Lilly was inducted into the US Olympic Hall of Fame in 2012 and the US Soccer Hall of Fame in 2014. Before that, she won four national championships at The University of North Carolina. Lilly is an expert on effective teamwork and is co-author of Power House, Teamwork Tactics that Build Excellence and Unrivaled Success. For the past ten years, she has been running the TeamFirst Soccer Academy with former teammates Mia Hamm and Tisha Venturini.  They travel the country teaching and empowering girls through the game of soccer.