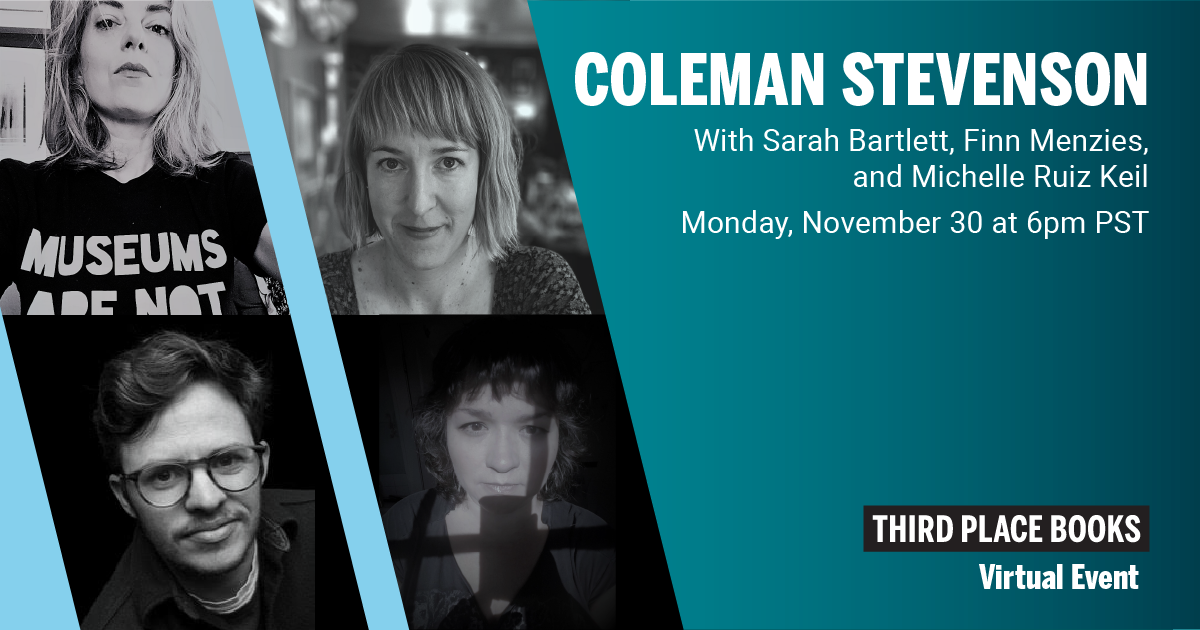 Join us for an evening of poetry and prose with four acclaimed writers, live on Zoom!

COLEMAN STEVENSON is the author of three collections of poems, Light Sleeper (Deep Overstock, 2020), Breakfast (Reprobate Books, 2015), and The Accidental Rarefication of Pattern #5609 (Bedouin Books, 2012), several books about the Tarot including The Dark Exact Tarot Guide, and a book of essays on creativity accompanying the card game Metaphysik. Her writing has appeared in a variety of publications such as Seattle Review, Mid-American Review, Louisiana Literature, tarot.com, and the anthology Motionless from the Iron Bridge. In addition to her work as a designer of tarot and oracle decks through her company The Dark Exact, her fine art work, exhibited in galleries around the Pacific Northwest, focuses on the intersections between image and text. She has been a guest curator for various gallery spaces in the Portland, Oregon, area, and has taught poetry, design theory, and cultural studies at a number of different institutions there, most currently for the Literary Arts Delve series, which includes seminars at the Portland Art Museum.

SARAH BARTLETT lives in Seattle, WA. Her recent chapbook, Columbarium, was released in 2019 by dancing girl press. Her poetry collection, Sometimes We Walk With Our Nails Is Out, was released in 2016 by Subito Press. She is the author of two chapbooks, My Only Living Relative, published by Phantom Books in 2015, and Freud Blah Blah Blah, published by Rye House Press in 2014. She is also co-author of two collaborative chapbooks. Recent work has appeared in Eratio, PEN American Poetry Series, Poetry Daily, Lit, Boog City, Alice Blue, and elsewhere.

FINN MENZIES is a kindergarten teacher, poet, and Queer Inclusion consultant in Seattle, WA. His debut collection, Brilliant Odyssey Don't Yearn, was published in 2017 by FOG MACHINE, and his chapbook These Are Our Beard of Bougainvillea was published earlier this year by Big Lucks Books. Annually, Finn facilitates UNdoing Ego: a workshop on meditation and generative writing. Currently, he is working on a children’s book on the healing of quietude.

MICHELLE RUIZ KEIL is a writer and tarot reader with an eye for the enchanted and a way with animals. Her critically acclaimed debut novel, All of Us With Wings, called "...a transcendent journey" by the New York Times and "...a fantastical ode the Golden City's post-punk era" by Entertainment Weekly, was released from Soho Teen in 2019. Her short fiction is published or forthcoming in Cosmonauts Avenue, The Buckman Journal, and the anthologies Color Outside The Lines and Dispatches From Anarres.  Her second novel, Summer In The City of Roses, a remix of ancient Greek myth and The Brother’s Grimm, is forthcoming in June, 2021. A San Francisco Bay Area native, Michelle has lived in Portland, Oregon for many years. She curates the fairytale reading series All Kinds of Fur and lives with her family in a cottage where the forest meets the city.