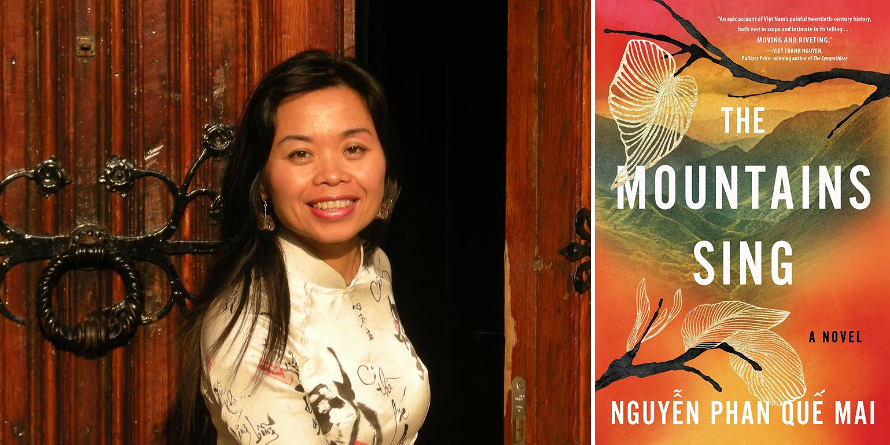 *Copies of The Mountains Sing will come with a signed bookplate!*

Click here to register for the event on Crowdcast and watch it live.

Join us for a conversation with Nguyễn Phan Quế Mai (The Mountains Sing).

Visit https://www.crowdcast.io/e/mountains-sing to register and to watch the event live.

Nguyễn Phan Quế Mai’s first novel, The Mountains Sing, is one of the most anticipated debuts of 2020 and received glowing reviews from The New York Times, NPR and more. It is her first book in English. It is a New York Times Editor's Choice and was voted a best new historical fiction novel by Goodreads users. The Mountains Sing is her first book in English; she’s also written and translated 18 books in Vietnamese. She has also written and translated 18 books in Vietnamese. Quế Mai’s many honors include Poetry of the Year 2010 Award from the Hà Nội Writers Association, the Capital’s Literature & Arts Award, and the Việt Nam Writers Association’s Award for Outstanding Contribution to the Advancement of Vietnamese Literature Overseas. She has a PhD in Creative Writing with the UK's Lancaster University and is a Honorary Fellow in Writing of Hong Kong Baptist University.

Quế Mai currently lives in Jakarta, Indonesia, where she is a journalist and writing teacher and continues her work in sustainable development.

Thanh Tan is an independent storyteller and senior communications manager for Microsoft Public Affairs, focused on producing stories about how technology impacts people around the world. Prior to this, she was an award-winning multimedia journalist and documentary producer for commercial and public media outlets, including Idaho Public Television, The Texas Tribune and The Seattle Times. She’s also the creator and host of Second Wave, a podcast from KUOW and PRX that focused on Vietnamese American refugee experiences 40 years after the Vietnam War. Her work has also appeared in The New York Times, This American Life and Self Evident.

The Mountains Sing is available for purchase from Third Place Books.

This event is part of the Author Voices series, made possible with support from the King County Library System Foundation.