KCLS Livestream: Molly Ostertag — The Witch Boy series and The Girl from the Sea 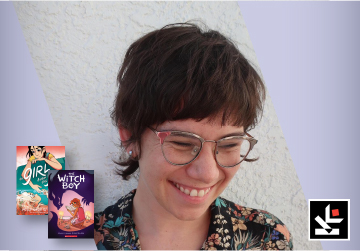 King County Library System welcomes Molly Ostertag, creator of the The Witch Boy series and The Girl from the Sea, to talk about her books and love of comics!

From the author of The Witch Boy trilogy comes a graphic novel about family, romance, and first love.

Fifteen-year-old Morgan has a secret: She can't wait to escape the perfect little island where she lives. She's desperate to finish high school and escape her sad divorced mom, her volatile little brother, and worst of all, her great group of friends. . . who don't understand Morgan at all. Because really, Morgan's biggest secret is that she has a lot of secrets, including the one about wanting to kiss another girl.Then one night, Morgan is saved from drowning by a mysterious girl named Keltie. The two become friends and suddenly life on the island doesn't seem so stifling anymore.But Keltie has some secrets of her own. And as the girls start to fall in love, everything they're each trying to hide will find its way to the surface. . . whether Morgan is ready or not.

In thirteen-year-old Aster's family, all the girls are raised to be witches, while boys grow up to be shapeshifters. Anyone who dares cross those lines is exiled. Unfortunately for Aster, he still hasn't shifted . . . and he's still fascinated by witchery, no matter how forbidden it might be.When a mysterious danger threatens the other boys, Aster knows he can help—as a witch. It will take the encouragement of a new friend, the non-magical and non-conforming Charlie, to convince Aster to try practicing his skills. And it will require even more courage to save his family. . . and be truly himself.

Molly Knox Ostertag is the New York Times bestselling author and illustrator of the acclaimed Witch Boy trilogy: The Witch Boy, The Hidden Witch, and The Midwinter Witch, as well as a writer for animation. A graduate of the School of Visual Arts, Molly was featured in the Forbes 30 Under 30: Media list in 2020. She lives in Los Angeles with her wife, two cats, and a very cuddly dog. You can visit her online at mollyostertag.com.