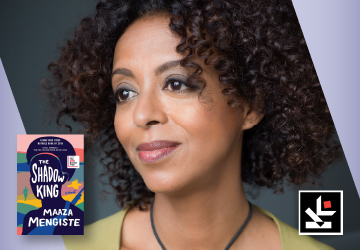 Shortlisted for the 2020 Booker Prize, and named a best book of the year by the New York Times, NPR, Elle, Time, and more, The Shadow King is an “unforgettable epic from an immensely talented author who’s unafraid to take risks” (Michael Schaub, NPR).

Set during Mussolini’s 1935 invasion of Ethiopia, The Shadow King takes us back to the first real conflict of World War II, casting light on the women soldiers who were left out of the historical record. At its heart is orphaned maid Hirut, who finds herself tumbling into a new world of thefts and violations, of betrayals and overwhelming rage. What follows is a heartrending and unputdownable exploration of what it means to be a woman at war.

Maaza Mengiste is a novelist and essayist whose work examines the individual lives at stake during migration, war, and exile. Beneath the Lion’s Gaze, her critically acclaimed debut novel, was selected by The Guardian as one of the 10 best contemporary African books and was named one of the best books of 2010 by The Christian Science Monitor, The Boston Globe, and other publications. Her second novel, The Shadow King, was a finalist for the Man Booker Prize and The Los Angeles Times Book Prize for Fiction.

Lydia Assefa-Dawson is the Family Self-Sufficiency Coordinator at King County Housing Authority and Financial Education Facilitator & Coach for YWCA’s Economic Resiliency Initiative, where she works primarily with survivors of domestic violence. She has more than 25 years of experience in the human service world. In addition, she has been a member of the City of Federal Way City Council since 2014. She has a passion for addressing homelessness and affordable housing, as well as engaging in diversity and equity work. She holds a Masters in Organizational Management, a Bachelors of Science in Biology, and has completed post-graduate studies in Social Services as well as certificates in leadership. She's won multiple awards for her work.