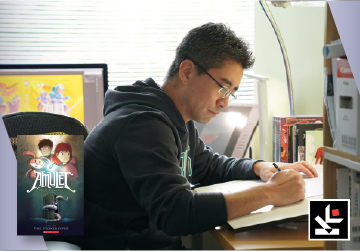 King County Library System welcomes Kazu Kibuishi, creator of the Amulet series, will talk about his books and love of comics!

About the Amulet series. . .

After the tragic death of their father, Emily and Navin move with their mother to the home of her deceased great-grandfather, but the strange house proves to be dangerous. Before long, a sinister creature lures the kids' mom through a door in the basement. Em and Navin, desperate not to lose her, follow her into an underground world inhabited by demons, robots, and talking animals. Eventually, they enlist the help of a small mechanical rabbit named Miskit. Together with Miskit, they face the most terrifying monster of all, and Em finally has the chance to save someone she loves.

Kazu Kibuishi is the creator of the #1 New York Times bestselling Amulet series, which is available in 16 languages. He is also the creator of Copper, a collection of his popular webcomic that features an adventuresome boy-and-dog pair. Kazu also illustrated the covers of the 15th anniversary paperback editions of the Harry Potter series written by J.K. Rowling. He lives and works near Seattle, Washington, with his wife, Amy Kim Kibuishi, and their children.