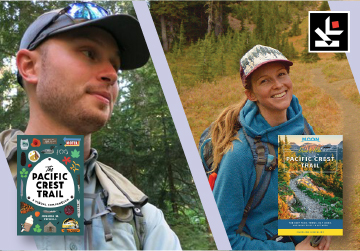 About The Pacific Crest Trail: A Visual Compendium. . .

The Pacific Crest Trail as you've never seen it before! A visual feast for the senses, this highly designed paperback showcases the PCT through clever infographics, modern illustration, and insightful text. The book captures both the grandeur of the West Coast as well as the tiniest things that a thru-hiker notices and experiences during a 140-day trek.

Through the written word, graphic design, and illustration, The Pacific Crest Trail: A Visual Compendium conveys the beauty and the beastliness of a 2,650-mile wilderness hike from Mexico to Canada. The author chronicles the PCT through infographics about the trail and the thru-hikers' experience, and includes arresting illustrations of the landscape and minutiae of the trail. Everything from trail markers, weather challenges, and the stories behind popular toponyms to the songs stuck in a hiker's head, thru-hiker trail names, and food consumed will be addressed, making this an ideal gift for any outdoor enthusiast.

Whether you're day hiking or taking a weekend getaway, hit the road and hit the legendary trail in California, Oregon, and Washington with Moon Drive & Hike Pacific Crest Trail. Make your escape on shorter trips from nearby cities, hit all the national parks along the PCT, or drive the entire two-week route from California to Washington. Find your hike along the Pacific Crest Trail with detailed trail descriptions, difficulty ratings, mileage, and tips for picking the right section of the trail for you.

Take it from avid hiker Caroline Hinchliff, who shares her insight on the best spots for wildlife-watching, glamping, or having a Wild moment. Get the lowdown on when and where to get gas, how to avoid traffic, and braving different road and weather conditions, plus tips for LGBTQ travelers, seniors, and road-trippers with kids.

With Moon Drive & Hike Pacific Crest Trail's practical tips and local know-how, you're ready to lace up your hiking boots, pick a trailhead, and embark on your adventure.

Joshua M. Powell grew up in Virginia and studied art and design at James Madison University, earning a BFA. After moving west, he began taking longer and longer trips into the backcountry before deciding to hike the Pacific Crest Trail from Mexico to Canada in 2014. He has worked in book design and production, receiving first place in the New York Book Show and the Gold Award in the PubWest Book Design Awards. Additionally, he has worked as a bookseller and a printing press operator. He currently lives in Spokane, Washington.

Caroline Hinchliff, born in California, raised in Washington, and currently residing in Oregon, has lived within 100 miles of the Pacific Crest Trail her entire life and has traveled extensively on the interstates, highways, and forest roads that surround the trail. She hiked 2,000 miles on the PCT during her thru-hike, spending time on the trail as well as in the towns and communities nearby. Since then, she's returned to various sections of the trail many times for day hikes and to lead guided backpacking tours. Caroline spends her free time exploring the breweries, restaurants, and destinations in her home of Cascade Locks, Oregon, chatting with chefs, owners, and locals to hear their stories. She's also out in the mountains least once a week, often on or near the PCT, in a quest to accomplish 52 hikes this year. Find out more about Caroline at eathikelove.com.