KCLS Livestream: Author Voices: Pramila Jayapal (Use the Power You Have) with Nick Licata 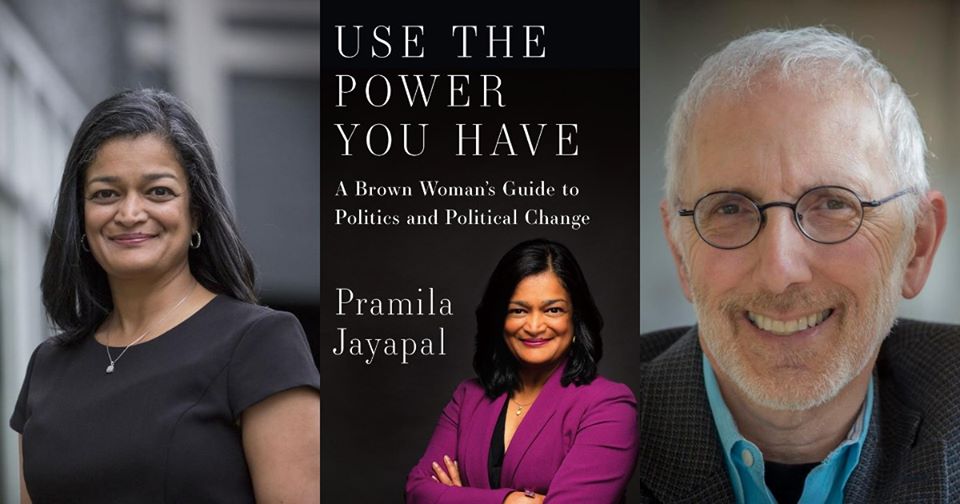 KCLS Livestream Event:  Author Voices: Pramila Jayapal (Use the Power You Have) with Nick Licata

Join us for a conversation about political engagement with U.S. Representative Pramila Jayapal, author of Use the Power You Have. Former Seattle City Councilmember Nick Licata will moderate.

Register to save your spot.
https://www.crowdcast.io/e/use-the-power-you-have/register

A former Washington State Senator and a lifelong organizer for immigrant, civil and human rights, U.S. Representative Pramila Jayapal (WA-07) was elected to Congress in 2016 where she now serves as the Co-Chair of the Congressional Progressive Caucus. Born in India before coming to the United States alone at the age of 16, she was the first South Asian American woman elected to the House of Representatives and is one of only 14 immigrants serving in Congress. She currently serves on the Judiciary Committee, the Budget Committee, and the Education and Labor Committee.

Nick Licata is from a working-class family, where neither parent graduated from high school. Licata, who couldn’t read until the age of nine, was the first of his relatives to attend college.

He led the local chapter of Students for a Democratic Society (SDS) at Bowling Green State University and subsequently was elected student body president. He became a Seattle City Councilmember despite being significantly outspent, with the majority of the council, the mayor, and both daily newspapers supporting his opponent. He was elected to five terms to the council and became its president.

In 2012 he was named Progressive Municipal Official of the Year by The Nation. He was twice named Best Local Politician by the Seattle Weekly. He was an acknowledged leader in passing Paid Sick & Safe Leave, raising the minimum wage to $15 an hour, and legalizing marijuana. He initiated the founding of Local Progress; the national municipal policy network and served as its first chairman.

He is the author of two books: Becoming a Citizen Activist: Stories, Strategies, & Advice for Changing Our World and Princess Biana and the Vandals, a children’s novel.

Prepare for the event and get help with technical questions by reading the Crowdcast attendee guide. Pro-tip: If you're having issues with video quality, click the gear icon in the bottom right corner of the screen and change your resolution from "Auto" to 360p.

If you would like to watch the conversation with live captioning, please visit the King County Library System's YouTube Channel on the day of the event to view a simulcast. Automatically generated live captions use machine learning, and the result is imperfect but helpful for many. Chat on YouTube will not be monitored. This event will be recorded. A video with captions will be available on our YouTube channel. An audio-only version will appear in our podcast feed, with a transcript in the shownotes. These alternative access points will be available about a week after the event.

Do you have questions for the authors? Submit your questions using the "Ask a question" button. Audience members may also vote for the questions they would like to hear answered. Questions submitted in the chat will not be monitored. It's likely that there will not be time to answer every question. Questions will be chosen by the authors and moderator.

This event is part of the Author Voices series, made possible with support from the King County Library System Foundation.  Find more upcoming author events by visiting the KCLS event calendar.