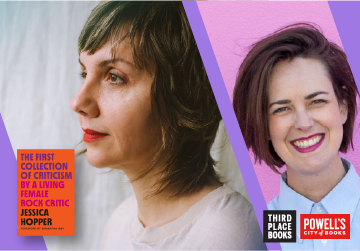 Powell's Books and Third Place Books are thrilled to welcome Jessica Hopper for the revised and expanded edition of The First Collection of Criticism by a Living Female Rock Critic (FSG x MCD). She will be joined in conversation by Ann Friedman, co-author of Big Friendship and co-host of the Call Your Girlfriend podcast. This event will be hosted on Powell's Books Zoom platform.

About The First Collection of Criticism by a Living Female Rock Critic. . .

Throughout her career, spanning more than two decades, Jessica Hopper, a revered and pioneering music critic, has examined women recording and producing music, in all genres, through an intersectional feminist lens. The First Collection of Criticism by a Living Female Rock Critic features oral histories of bands such as Hole and Sleater Kinney, interviews with the women editors of 1970s-era Rolling Stone, and intimate conversations with iconic musicians such as Björk, Robyn, and Lido Pimienta. Hopper journeys through the truths of Riot Grrrl's empowering insurgence; decamps to Gary, Indiana, on the eve of Michael Jackson's death; explodes the grunge-era mythologies of Nirvana and Courtney Love; and examines the rise of emo. The collection also includes profiles and reviews of some of the most-loved, and most-loathed, women artists making music today: Fiona Apple, Kacey Musgraves, M.I.A., Miley Cyrus, Lana Del Rey.

In order for the music industry to change, Hopper writes, we need “the continual presence of radicalized women . . . being encouraged and given reasons to stay, rather than diminished by the music that glues our communities together.” The First Collection of Criticism by a Living Female Rock Critic—published to acclaim in 2015, and reissued now with new material and an introduction by Samantha Irby—is a rallying cry for women-centered history and storytelling, and a groundbreaking, obsessive, razor-sharp panorama of music writing crafted by one of the most influential critics of her generation.

Praise for The First Collection of Criticism by a Living Female Rock Critic. . .

"The First Collection is a game-changer, a godsend, and a Holy Grail for those who have been forced to reside on the fringe of the notoriously "male-dominated sphere" of rock criticism and fandom [...] Hopper's work, influence, and unwavering support for the diversification of voice and perspective within music journalism have altered the landscape of rock criticism for the better. It may be the first collection of criticism written by a female rock critic, but it's definitely not the last."
—The Village Voice

"An airtight case for why the professional critic still matters, and why it is a thrill to spend time in the presence of someone whose job it is to care so much and so intelligently."
—Chicago Tribune

"Has there ever been a person in your life whose opinion carried colossal weight regardless of the topic being discussed? Someone who changed your mind and pushed your buttons, always ahead of the curve and deeply entrenched in the scene with a scholar's knowledge of the who/what/where. For me that person has always been Jessica Hopper."
—Sara Quin, Tegan & Sara

Jessica Hopper is the author of the books The First Collection of Criticism By A Living Female Rock Critic and Night Moves. Her writing has appeared in GQ, Rolling Stone, The New York Times Magazine, The Guardian, Elle, and Bookforum, among other outlets. A long time contributor to the Chicago Reader, she has been a columnist for the Village Voice and Chicago Tribune, the music consultant for This American Life, the editorial director for MTV News, and a senior editor at Pitchfork and Rookie. Her essays have appeared in several editions of Best Music Writing, and she currently serves as series editor of the American Music Series at the University of Texas Press.

Ann Friedman is a journalist who covers gender, politics, technology, and culture for many publications, including New York magazine, The Los Angeles Times, and The Gentlewoman. She co-hosts the podcast Call Your Girlfriend, and is the co-author of Big Friendship: How We Keep Each Other Close. Find her work and subscribe to her popular weekly email newsletter at annfriedman.com.