Jessamine Chan with Angela Garbes — 'The School for Good Mothers: A Novel' 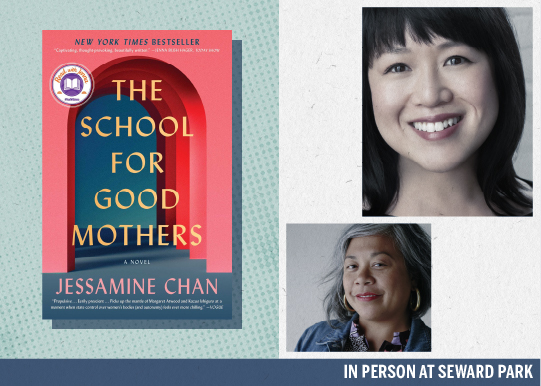 In this taut and explosive debut novel, one lapse in judgment lands a young mother in a government reform program where custody of her child hangs in the balance.

Third Place Books is pleased to welcome Jessamine Chan for the paperback release of her New York Times bestselling novel, The School for Good Mothers. An “intense” (Oprah Daily), “captivating” (Today) page-turner that is also a transgressive novel of ideas about the perils of “perfect” upper-middle class parenting; the violence enacted upon women by both the state and, at times, one another; the systems that separate families; and the boundlessness of love, The School for Good Mothers introduces, in Frida, an everywoman for the ages. Using dark wit to explore the pains and joys of the deepest ties that bind us, Chan has written a modern literary classic.

Jessamine Chan will be joined in conversation by Angela Garbes, the celebrated local author of Essential Labor: Mothering as Social Change. This event is free and open to the public. Registration is required in advance.

This event will include a public signing and time for audience Q&A. Sustain our author series by purchasing a copy of the featured book!

About The School for Good Mothers: A Novel. . .

Longlisted for the 2023 Carnegie Medal for Excellence
Shortlisted for The Center for Fiction 2022 First Novel Prize
Selected as One of Barack Obama’s Summer 2022 Reading List Picks!

In this New York Times bestseller and Today show Read with Jenna Book Club Pick, one lapse in judgment lands a young mother in a government reform program where custody of her child hangs in the balance, in this “surreal” (People), “remarkable” (Vogue), and “infuriatingly timely” (The New York Times Book Review) debut novel.

Frida Liu is struggling. She doesn’t have a career worthy of her Chinese immigrant parents’ sacrifices. She can’t persuade her husband, Gust, to give up his wellness-obsessed younger mistress. Only with Harriet, their cherubic daughter, does Frida finally attain the perfection expected of her. Harriet may be all she has, but she is just enough.

Until Frida has a very bad day.

The state has its eye on mothers like Frida. The ones who check their phones, letting their children get injured on the playground; who let their children walk home alone. Because of one moment of poor judgment, a host of government officials will now determine if Frida is a candidate for a Big Brother-like institution that measures the success or failure of a mother’s devotion.

Faced with the possibility of losing Harriet, Frida must prove that a bad mother can be redeemed. That she can learn to be good.

Praise for The School for Good Mothers: A Novel. . .

"Jessamine Chan’s infuriatingly timely debut novel, The School for Good Mothers, takes this widely accepted armchair quarterbacking of motherhood and ratchets it up to the level of a surveillance state — one that may read more like a preview than a dystopia, depending on your faith in the future of Roe v. Wade...chilling...clever."
—The New York Times Review

“The School for Good Mothers picks up the mantle of writers like Margaret Atwood and Kazuo Ishiguro, with their skin-crawling themes of surveillance, control, and technology; but it also stands on its own as a remarkable, propulsive novel. At a moment when state control over women’s bodies (and autonomy) feels ever more chilling, the book feels horrifyingly unbelievable and eerily prescient all at once.”
—Vogue

"This debut novel was so captivating, thought-provoking and beautifully written, everything I tried to pick up next paled in comparison...It was all I wanted to talk about, think about and read."
—The Today Show

Jessamine Chan’s short stories have appeared in Tin House and Epoch. A former reviews editor at Publishers Weekly, she holds an MFA from Columbia University’s School of the Arts and a BA from Brown University. Her work has received support from the Elizabeth George Foundation, the Bread Loaf Writers’ Conference, the Wurlitzer Foundation, the Jentel Foundation, the Kimmel Harding Nelson Center, the Anderson Center, the Virginia Center for the Creative Arts, and the Ragdale Foundation. She lives in Philadelphia with her husband and daughter. (Photo credit: Beowulf Sheehan)

Angela Garbes is the author of Essential Labor: Mothering as Social Change, called “a landmark and a lightning storm” by the New Yorker. Essential Labor was named a Best Book of 2022 by both the New Yorker and NPR. Her first book, Like a Mother, was also an NPR Best Book of the Year as well as a finalist for the Washington State Book Award in nonfiction. Her writing has appeared in The New York Times, The Cut, New York, and featured on The Daily Show with Trevor Noah and Fresh Air with Terry Gross. A first-generation Filipina American, Garbes lives with her family on Beacon Hill. (Photo credit: Elizabeth Rudge)