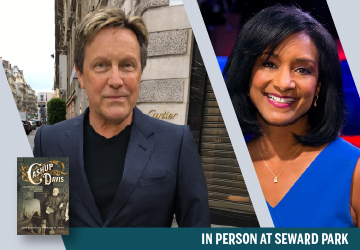 “A firsthand account of how to be an achiever against incredible obstacles… You will be inspired.” —Mike Leach

Third Place Books welcomes investigative reporter Jeff Burnside to our Seward Park store! In conversation with King5 Evening Anchor Joyce Taylor, Burnside will be discussing his debut work of nonfiction, Cashup Davis: The Inspiring Life of a Secret Mentor, co-authored by Gordon W. Davis. This event is free and open to the public. Registration is required in advance.

(Please note: Julie Blacklow, previously scheduled to be in conversation, is no longer able to attend.)

Copies of Cashup Davis will be available for purchase at the store. This event will include a public signing and time for audience Q&A. Sustain our author series by purchasing a copy of the featured book!

Enamored by the western frontier, British immigrant Cashup Davis, his wife Mary, and eleven children became one of the first white families to settle on the Palouse's spectacular rolling hills in eastern Washington Territory. Living at first in a simple sod house, they turn their bunchgrass acreage into a farm, befriend Native Americans during a war ignited by the U.S. government's treaty violations, and eventually open an immensely popular and prosperous stagecoach stop. But Cashup has another dream: he is resolutely determined to build a grand luxury hotel on one of the region's highest points, the summit of Steptoe Butte. People tell him it is a ridiculous idea, but Cashup never listens to the doubters. He's brash, confident, and ever so charming.

The story is told through the eyes of his great-grandson, Gordy Davis, who views Cashup as the "secret mentor" he never met. As Gordy has achieved success in his life and turned to philanthropy, he has sought to better understand his own good fortune by delving into his great-grandfather's astonishing past. Cashup's life prompts questions that are still relevant today: What is real success? Does it blind people to other joys in life? How should people balance risk and reward? Cashup's hotel opened on July 4, 1888, and he became one of Washington's first national celebrities. But no one—especially Gordy—expected what happened next.

“What a story! With lucid writing and illuminating detail culled from historical and family documents, they tell a compelling story as unusual as their subject’s name.”
—Tom Yulsman, Director of the Center for Environmental Journalism at the University of Colorado Boulder

“We loved it! At a time when the world can use an inspirational story, along comes an uplifting winner in the little-known story of Cashup Davis.”
—Gerald Posner, author of PHARMA and Case Closed, and Trisha Posner, author of The Pharmacist of Auschwitz

“James ‘Cashup’ Davis had ‘no interest in mediocrity,’ and neither do the authors of this book. Anyone who has seen Steptoe Butte will appreciate the drive (or perhaps hubris!) of the man who built a hotel at the top.”
—Elizabeth S. Chilton, Provost and Professor of Anthropology, Washington State University

Jeff Burnside is an accomplished TV news investigative reporter, winner of more than two dozen journalism awards including 10 TV news Emmys, National Press Club honors, IRE Certificate and other national and regional awards. He’s the past president of a major journalism association and has served on several prestigious national journalism awards judges’ panels. He’s also the recipient of numerous journalism fellowships including the year-long Scripps Journalism Fellowship at the University of Colorado. He is a frequent speaker and panelist and has served on a number of nonprofit boards of directors nationwide ranging from the Humane Society of the United States Wildlife Care Center in Fort Lauderdale to downtown Seattle’s Columbia Tower Club. Jeff’s investigative reporting has changed laws in multiple states and municipalities, caused the return of tens of millions of dollars to taxpayers and consumers, put more than a dozen people in jail or prison, sparked street protests, led to a U.S. Supreme Court ruling changing Navy bombing practices, closed unscrupulous businesses, inspired multiple class-action lawsuits and saved the lives of countless pets and animals. He's worked at some of the best TV newsrooms in America including KING 5 Seattle (NBC), KOMO 4 Seattle (KOMO), WTVJ Miami (NBC), WCVB Boston (ABC)and KSHB Kansas City (Fox/NBC). Cashup Davis: The Inspiring Life of a Secret Mentor is Jeff’s debut book. Several more are planned. A documentary film on Cashup Davis is also in production. He is a Seattle native and lives in Mukilteo.