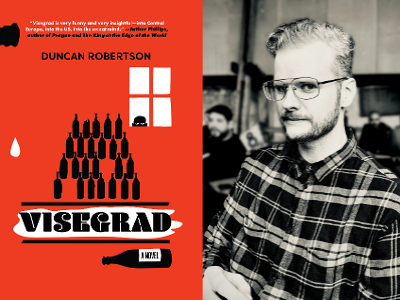 Duncan Robertson reads from his novel Visegrad at Capitol Hill Cider (818 E Pike St. Seattle, WA, 98122). He will be joined in conversation by Eric Henke, co-host of the podcast We Read Movies. This event is free and open to the public.

Third Place Books will have copies of Visegrad for sale at the venue.

Meet Rye, a young American writer adrift in Visegrad, where the national sport is appearing to work as hard as possible while doing nothing at all. Things get complicated in this rollicking satire when Rye partners with a loan-shark who has purchased the outstanding student debt of his fellow expats. He squares their accounts by signing the likes of Colin Having, who suspects the world’s dogs of conspiring against him, H. Defer, who is developing a universal theory based on the wetness of feet, and the SEC man, who has been sent to Visegrad to determine how Rye’s boss acquires individual student loans.

Before long, Rye discovers he is being followed. Customers disappear and he is no longer free to leave the country. Rye realizes that he must sabotage the lucrative business he has helped build, or else abandon his friends to a shady cabal in the Visegrad government.

Visegrad presents a world at once familiar and preposterous—an imaginary world, and yet one that is historically accurate in its an amalgamation of Prague, Budapest, Warsaw, Krakow, and Berlin. It is about getting away with something—being young, being cruel, falling in love. A must for fans of Prague (Arthur Phillips); The Sellout (Paul Beatty); Necessary Errors (Caleb Crain); All That Man Is (David Szalay); and Temporary People (Deepak Unnikrishnan).

"Visegrad is very funny and very insightful—into Central Europe, into the US, into the expat mind. I also have to reread it, probably right away, to sort out all the dizzying detail Robertson has packed it with. So, while I’m rereading it, you should be getting started now on reading it the first time."
—Arthur Phillips, author of Prague

"Swashbuckling their way across an imagined version of Europe, the characters in Duncan Robertson's picaresque novel are caught in a web of deceptions and chaos. Wise-cracking, funny, and a little transgressive, they will linger in your mind long after you've finished this first-rate novel."
—Pauls Toutonghi, author of Evel Knievel Days

Duncan Robertson is an American writer who has lived abroad, both in South Korea and Eastern Europe, since 2011. A native of Seattle, Washington, which he still visits regularly, he currently resides in Budapest, where he edits Panel, a magazine of English language literature produced in Central and Eastern Europe. His work has appeared in Expat Press Online, North Dakota Quarterly, and Unlikely Stories. (Photo credit: Alexa Fermeglia)