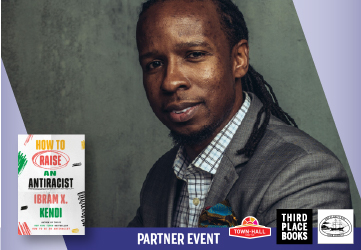 This in-person event is presented by Town Hall Seattle. Purchase tickets at townhallseattle.org.

Town Hall Seattle, Third Place Books, and Elliott Bay Book Company are thrilled to present Ibram X. Kendi—MacArthur Genius, one of Time's 100 most influential people in the world, and author of such modern essentials as How to Be an Antiracist and Stamped from the Beginning—for the release of How to Raise an Antiracist. His new book follows the stages of child development with scholarship and personal narrative to create the book that every parent, caregiver, and teacher needs to raise the next generation of antiracist thinkers.

This event will take place in-person at Town Hall Seattle. Tickets to view a livestream of this event are also available. All tickets include a copy of How to Raise an Antiracist, and additional books by Dr. Kendi's will be available at the venue for purchase.

About How to Raise an Antiracist. . .

The tragedies and reckonings around racism that have rocked the country have created a specific crisis for parents and other caregivers: how do we talk to our children about it? How do we guide our children to avoid repeating our racist history? While we work to dismantle racist behaviors in ourselves and the world around us, how do we raise our children to be antiracists?

After he wrote the National Book Award-winning Stamped from the Beginning, readers asked Ibram Kendi, “How can I be antiracist?” After  the bestsellers How to Be an Antiracist and Antiracist Baby, readers began asking: “How do I raise an antiracist child?” Dr. Kendi had been pondering the same ever since he became a teacher—but the question became more personal and urgent when he found out his partner, Sadiqa, was pregnant. Like many parents, he didn't know how to answer the question—and wasn't sure he wanted to. He didn't want to educate his child on antiracism; he wanted to shield her from the toxicity of racism altogether. But research and experience helped him realize that antiracism has to be taught and modeled as early as possible—not just to armor our children against the racism still indoctrinated and normalized in their world, but to remind adults to build a more just future for us all.

Following the model of his bestselling How to Be an Antiracist, Kendi combines vital scholarship with a compelling personal narrative of his own journey as a parent to create a work whose advice is grounded in research and relatable real-world experience. The chapters follow the stages of child development and don't just help parents to raise antiracists, but also to create an antiracist world for them to grow and thrive in.

Praise for How to Raise an Antiracist. . .

“Both memoir and call to action, Ibram X. Kendi’s insightful book rightly encourages the critical thinking that all adults need to engage the children they love in the most essential conversations about racism. Don’t fool yourself—silence is not a helpful strategy! If you want to raise empowered, antiracist children, read this book, take a deep breath, and start talking.”
—Beverly Daniel Tatum, Ph.D., author of Why Are All the Black Kids Sitting Together in the Cafeteria? and Other Conversations About Race

“With the fierce devotion of a parent who demands a safer world for his child, our most trusted voice on antiracism reveals the critical role of parents, caregivers, and teachers in fostering either racist or antiracist attitudes in all children. Rendered intimate with stories from his own childhood and his parenting journey, this book is as compassionate as it is cogent and timely. Ibram X. Kendi once again lights the way.”
—Julie Lythcott-Haims, New York Times bestselling author of How to Raise an Adult: Break Free of the Overparenting Trap and Prepare Your Kids for Success

“The littlest human being can learn to be an antiracist. Antiracist parenting is imperative as white supremacists recruit on the internet daily; parents need to be proactive by developing the skills and language to understand the parenting journey of antiracism. With love, vulnerability, and the remarkable brilliance we have now come to expect in his books, Kendi walks us through this journey. No matter where you are as an antiracist parent or the age of your child, this book is for you.”
—Bettina Love, author of We Want to Do More Than Survive: Abolitionist Teaching and the Pursuit of Educational Freedom

Dr. Ibram X. Kendi is the Andrew W. Mellon Professor in the Humanities at Boston University and the founding director of the BU Center for Antiracist Research. He is a contributing writer at The Atlantic and a CBS News racial justice contributor. He is the host of the new action podcast Be Antiracist. Dr. Kendi is the author of many highly acclaimed books including Stamped from the Beginning: The Definitive History of Racist Ideas in America, which won the National Book Award for Nonfiction, making him the youngest-ever winner of that award. He has also produced five straight #1 New York Times bestsellers, including How to Be an Antiracist, Antiracist Baby, and Stamped: Racism, Antiracism, and You, co-authored by Jason Reynolds. In 2020, Time magazine named Dr. Kendi one of the 100 most influential people in the world. He was awarded a 2021 MacArthur Fellowship, popularly known as the Genius Grant.