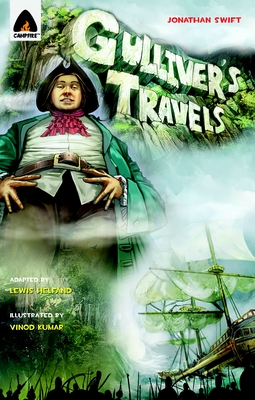 Lemuel Gulliver always dreamed of travelling the world. But when a violent storm claims his ship and casts him adrift among uncharted lands, he is taken to places that he could not even dream of.

Travelling to the nation of Lilliput, where the inhabitants measure just centimetres tall, and to Brobdingnag, where they tower into the sky like giants, Gulliver voyages to an island floating above the clouds, visits a race of immortals, and finds himself stranded in a land ruled by horses.

Face to face with warring armies and power-hungry kings, each new journey makes Gulliver more desperate to find a way back home. But once he discovers the truth about his own land and himself, returning home becomes the last thing he desires.

Written by world-renowned satirist Jonathan Swift, Gulliver's Travels is one of the most gripping and poignant adventures ever told.

Born on November 30, 1667 in Dublin, Jonathan Swift began writing essays and political pamphlets anonymously or under pseudonyms. His first major work, A Tale of a Tub, was published in 1704. Swift addressed the most prominent social, political, and religious issues of the time through his biting satirical essays and novels. Two of his most famous works are Gulliver's Travels and A Modest Proposal. He died in 1745, and is still considered to be one of the greatest satirists of all time.