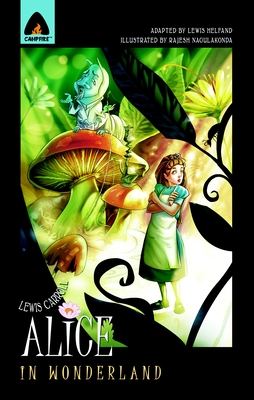 Alice was just an ordinary girl - imaginative and curious and thirsting for adventure. She was an ordinary girl, that is, until she found herself instantly transported to a place that was anything but ordinary.

After diving down a rabbit hole, young Alice encounters a magical world ruled by a vicious Queen. It is a world where anything can happen; a world filled with a talking caterpillar, a puppy as big as a house, and a Cheshire cat that can disappear and reappear in the blink of an eye. Are these colorful characters real? And if so, how will Alice ever find her way back home?

Beloved for more than a century, Alice's Adventures in Wonderland is widely viewed as Lewis Carroll's masterpiece; a fantastic journey that will never be forgotten.

Lewis Carroll was the pseudonym of Charles Lutwidge Dodgson. He was born on 27th January 1832 in the county of Cheshire, England and was the third of eleven children. Carroll went to study at Oxford University's Christ Church.

Henry Liddell arrived at Christ Church with his wife and children to serve as the new dean. Carroll became a close friend to the family, and would entertain Liddell's children with his fantastic stories. At the insistence of Alice, one of Liddell's daughters, Carroll wrote Alice's Adventures Underground in 1864. This collection of stories served as the basis for Alice's Adventures in Wonderland, which was published one year later.

When Alice's Adventures in Wonderland became an overwhelming success, Carroll published a sequel, known as Through the Looking Glass, in 1872. As he continued with his writing and teaching careers, Carroll also pursued a number of other passions including art and photography. He is also credited with inventing a word game known as Doublets.