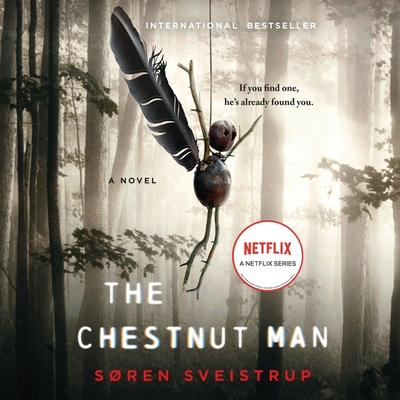 “This is the thriller of the year! From the creator of the Scandinavian mini-series The Killing, The Chestnut Man is an unbelievably fast-paced and exciting page-turner. I literally had trouble putting it down so I could go to sleep! A serial killer is on the loose, a cold case kidnapping is brought back to life, and a politician is attacked from all sides. This is the kind of book Thomas Harris would write, and it’s one of the best-plotted mysteries in a long time. What a wonderful group of vivid characters and what a ride! Whew!”
— William Carl, An Unlikely Story, Plainville, MA

IF YOU FIND ONE, HE'S ALREADY FOUND YOU

The heart-pounding debut from the creator of the hit Scandinavian television show The Killing.

A psychopath is terrorizing Copenhagen.

His calling card is a "chestnut man"--a handmade doll made of matchsticks and two chestnuts--which he leaves at each bloody crime scene.

Examining the dolls, forensics makes a shocking discovery--a fingerprint belonging to a young girl, a government minister's daughter who had been kidnapped and murdered a year ago.

A tragic coincidence--or something more twisted?

To save innocent lives, a pair of detectives must put aside their differences to piece together the Chestnut Man's gruesome clues.

Because it's clear that the madman is on a mission that is far from over.

And no one is safe.