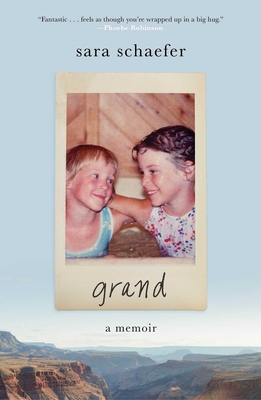 You have adventure, family drama, laughs! A comedian, upon her fortieth birthday, takes each of her family members on one-on-one vacations and chooses Grand Canyon whitewater rafting for her younger sister. With alternating chapters between treacherous days on the water and divulging her father's scandal that changed everything, it almost reads as fiction. She meets curious characters on her boat and faces some fears while also sharing the road to her comedy career and her struggles with religion and marriage. It tackles so much in such a digestible read!

For fans of Mennonite in a Little Black Dress and Let’s Pretend This Never Happened, comedian and Emmy Award–winning writer Sara Schaefer’s hilariously honest memoir follows Sara’s trip through the Grand Canyon with her sister that causes her to reflect on her childhood and the scandal that changed her family forever.

When Sara Schaefer is in first grade, her father warns her to always tell the truth because one lie leads to another and soon you will find yourself in a hole you can’t escape. A few years later, the Schaefer family is completely upended when it’s revealed that their grand life is based on a lie. Her parents become pariahs in their upper middle class community and go from non-religious people to devout church members. The idea of good and evil as binary, opposed forces is drilled into Sara and it becomes the perfect framework on which to build her anxiety and increasingly-obsessive thoughts.

The year she turns forty, Sara decides to take each member of her family on a one-on-one vacation culminating with a whitewater rafting journey through the Grand Canyon with her younger sister. The only problem is she’s terrified of rafting. Along the way, she grapples with unresolved grief over the death of her mother and the family scandal that changed the trajectory of her life.

Heartfelt, candid, and witty, Grand is a story about family, identity, and struggling to make something of yourself. Sara deconstructs her struggles with anxiety and depression, what it means to be a good person, and the radically discordant stories we tell ourselves and share with the world.

“In alternating chapters, and with plenty of heart, Schaefer traces the impact of a decades-old family scandal on her contemporary life in Grand.”
—Bustle

“Radiant ... [Schaefer] tells her story with a generosity that never lapses into sentimentality ... The melding of humor and pain makes Grand a fresh and engaging read. It is a wise, funny acknowledgment that we are not always in control—and that growth is most likely to happen when we let go.”
—Bookpage

“This is a funny, complicated book about a simple trip to the Grand Canyon that ends up unearthing some hilarious truths about its author, Sara Schaefer. I don’t even think she was ready for the upheaval, and she captures all of the confusion, beauty, and ultimate growth in brilliant prose. Go deep with this one.”
—Patton Oswalt, author of Zombie Spaceship Wasteland

“I may be a tad biased, as I've been witness to Sara's career for well over a decade now, but this book is fantastic. Its conversational and honest style feels as though you're wrapped up in a big hug by a friend who makes it safe for you to reveal the most inner secrets of your life. I'm so proud of Grand, and it confirms what I knew years ago: Schaefer is a true talent, a strong writer, and has a delightful voice that we need to hear more of. This is just the beginning.”
—Phoebe Robinson, author of You Can't Touch My Hair

“I already knew from her comedy that Sara Schaefer is one of the funniest, smartest, bravest ones out there. But I didn’t understand just how deep the funny/smart/brave went until I went with her on this wild river descent into the Grand Canyon and her own secret family history. This is a Class 1000 Rapids of a memoir and I urge you to take the ride.”
—John Hodgman, author of Vacationland

“I already knew Sara was a great comedy writer. In Grand, she reveals herself to be a great author as well. Through her trip down a crack in the earth’s skin, Sara cracks open her own skin and lets her insides spill onto the page. Grand is funny, sweet, heartbreaking, vulnerable, and powerfully written. You’ll tear through it at the speed of a Class X rapid.”
—Moshe Kasher, author of Kasher in the Rye

“Damn funny and damn poignant ... Schaefer takes us on a wild, hilarious and moving ride through the stirring, scenic Grand Canyon and the turbulent rapids of her own soul.  It’s one hell of a good trip!”
—Ed Helms

“Sometimes you have to go all the way to the bottom of the Grand Canyon to find your footing, and sometimes you just need the right book. In this vulnerable, hilarious and nostalgic reflection, Sara plunges us into some of life's wildest, most painful and most relatable circumstances, all while making sure our life vest is on tight.”
—Abbi Jacobson, author of I Might Regret This