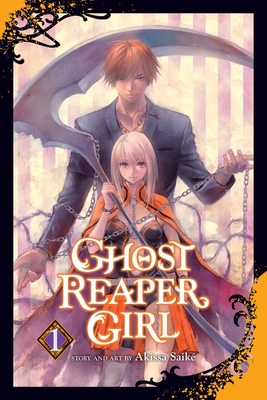 This is book number 1 in the Ghost Reaper Girl series.

Beware, evil spirits! Ghost Reaper Girl is on the case!

Chloé has dreamed of leading a glamorous life as an actress ever since she was little. But being the ripe old age of 28 might be working against her, and her spontaneous displays of violence aren’t helping either! Not all hope is lost, however—she might be perfect for the role offered by a mysterious and charming new man in her life. Can Chloé become the Ghost Reaper Girl and take down the evil spirits that have escaped from Hades?

With the help of the mysterious Kai, Chloé can transform into a powerful ghost buster known as Ghost Reaper Girl. But Chloé better learn to control her new powers fast, because evil spirits are popping up everywhere!

Akissa Saiké began working professionally as a manga artist with the four-volume magical-warrior fantasy series Kiruto in 2002, which was serialized in Monthly Shonen Jump. Rosario+Vampire began serialization in Monthly Shonen Jump in March of 2004 and continued in Jump SQ as Rosario+Vampire: Season II. In 2020, he changed his pen name from Akihisa Ikeda and launched Ghost Reaper Girl on the Jump+ platform.