Where You Come From (Paperback) 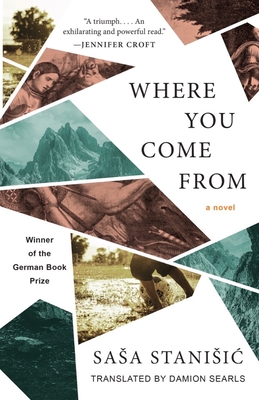 Like the Croatian writer Dubravka Ugrešić, Saša Stanišić writes about the experience of growing up in a country that no longer exists, the former Yugoslavia. I couldn't name another work of literature that fuses Dungeons & Dragons lore, choose-your-own-adventure antics, multigenerational conflict, biting witticisms against fascists, and a stunning account of what it's like to witness a person you love vanish within the specter of dementia. Stanišić could find no better translator than Damion Searls, whose gifted shaping of Stanišić's prose into English makes Where You Come From one of the best books I've read this year.

Translated from the German by Damion Searls

Winner of the German Book Prize, Saša Stanišic’s inventive and surprising novel asks: what makes us who we are?

In August, 1992, a boy and his mother flee the war in Yugoslavia and arrive in Germany. Six months later, the boy’s father joins them, bringing a brown suitcase, insomnia, and a scar on his thigh. Saša Stanišic’s Where You Come From is a novel about this family, whose world is uprooted and remade by war: their history, their life before the conflict, and the years that followed their escape as they created a new life in a new country.

Blending autofiction, fable, and choose-your-own-adventure, Where You Come From is set in a village where only thirteen people remain, in lost and made-up memories, in coincidences, in choices, and in a dragons’ den. Translated by Damion Searls, it’s a novel about homelands, both remembered and imagined, lost and found. A book that playfully twists form and genre with wit and heart to explore questions that lie inside all of us: about language and shame, about arrival and making it just in time, about luck and death, about what role our origins and memories play in our lives.

Saša Stanišic was born in Višegrad (Yugoslavia) in 1978 and has lived in Germany since 1992. His debut novel, How the Soldier Repairs the Gramophone, was translated into thirty-one languages; Before the Feast was a bestseller and won the renowned Leipzig Book Fair Prize.

Damion Searls is an award-winning translator from German, Norwegian, French, and Dutch,and the author of The Inkblots, a history of the Rorschach test and biography of its creator.

Charming. . . . This realistic portrayal of refugees will engender compassion with its humor and subtlety.
— The Washington Post

[Saša
Stanišic is] a Bosnian-German wunderkind whose gripping tale about a
refugee family marries formal experimentation and deadpan humor amid the
suffocating smoke of survivors’ guilt.
— Oprah Daily

Saša Stanišic is a revolutionary who has found his true home in language.
— The Rolling Stone

A novel about how stories come to be written, transmitted and often distorted, forgotten or erased. . . . Stanisic is a versatile writer and moments of acerbic wit—which recall the razor-sharp commentary of fellow Yugoslav-born author Dubravka Ugresic—are interspersed with poignant descriptions of unbelonging in Germany.
— Financial Times

A thrilling shapeshifter of a novel.
— Ploughshares

Vast and multifaceted. . . . a timely antidote to poisonous political
blame-games and sneering statements about the plight of refugees.
— Necessary Fiction

The idea that Saša Stanišic’s new book brings together ‘autofiction, fable, and choose-your-own-adventure’ is too hard to resist. That’s a bold array of elements to bring together; for a book like this, that addresses the legacy of war and questions of national identity, it sounds especially compelling.
— Vol.1 Brooklyn

Where You Come From is presented in a light, appealing style. . . . keen observations and scenes, all of it going down easily in a quick, solid read.

Where You Come From is a triumph, funny and touching and subtly profound. As it ranges from chronicle to prose poem to folk tale, it builds a momentum that dazzles throughout. An exhilarating and powerful read.

A Speak, Memory for 'The Garden of Forking Paths,' Stanišic's tour of his lost homeland is imbued with wit and affection. He knows stories are all we have, and that some stories can't be bound by a single ending. A marvel and a delight.

— Ryan Chapman, author of Riots I Have Known

Tender, intelligent, and brilliant. . . . a stunning novel that asks what it really means to be from somewhere, anywhere.
— Kirkus, Starred Review

A shape-shifting self-portrait with some mesmerizing elements.
— Publishers Weekly

A playful, formally adventurous novel that freely blends truth and fiction in its meditation on homelands. . . . The novel is determined to surprise and unmoor readers, perhaps in the same way the author/protagonist found the course of his own life surprising and disconcerting, with the author's restless imagination a constant, delightful companion.
— Shelf Awareness