The Promise of the Pelican: A Novel (Hardcover) 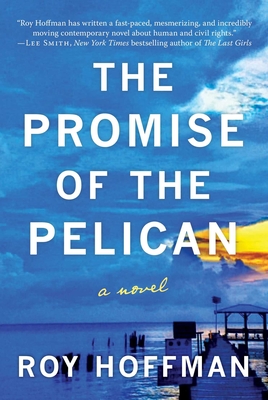 For fans of Harper Lee and Rita Mae Brown, Roy Hoffman's new novel is steeped in a sense of place--coastal Alabama--with its rich tapestry of characters caught in a web of justice not for all.

Early Praise for The Promise of the Pelican:

"A thrilling novel, with characters as memorable as those of Shakespearean tragedy...I could not put it down." --Sena Jeter Naslund, author of Ahab's Wife

At once a literary crime novel and an intergenerational family drama, The Promise of the Pelican is set in the multicultural South, where justice might depend on the color of your skin and your immigration status. Hank Weinberg is a modern day Atticus Finch, recently retired as a defense attorney in Mobile, Alabama, and a Holocaust survivor, who fled the Nazis as a young child. With his daughter in rehab, he's now taking care of his special needs grandson. Mourning his dead wife, spending mornings fishing on the pier with other octogenarians, he passes the rest of his days watching over his sweet grandson with the help of Lupita, a young Honduran babysitter. When her brother Julio, an undocumented immigrant, is accused of murder, Hank must return to the courtroom to defend him while also trying to save his daughter and grandson's life from spinning out of control. The Promise of the Pelican takes its title from the legend that a pelican will pierce its own breast for blood to feed its starving chicks, a metaphor for one old man who risks all to save the vulnerable.

In a crisp prose style Harper Lee called "lean and clean," Hoffman writes from an enormous well of compassion. He fills his new novel with a cast of finely drawn characters of all ages and abilities facing life's harshest challenges and rising to meet them with dignity.

Roy Hoffman is the award-winning author of the novels Come Landfall, Chicken Dreaming Corn, and Almost Family, and nonfiction Alabama Afternoons and Back Home. He has written essays for the New York Times, Washington Post, and Wall Street Journal and was a journalist and speechwriter in New York before returning south. He has reviewed numerous works for the New York Times Book Review and is on the faculty of Spalding University’s Naslund-Mann Graduate School of Writing. A native of Mobile and Tulane University graduate, he resides in Fairhope, Alabama.

In Praise of The Promise of the Pelican

“A fast-paced and mesmerizing novel…”—Mystery Tribune

“Roy Hoffman has written a fast-paced, mesmerizing and incredibly moving contemporary novel about human and civil rights … not only filled with heart-dropping events but complicated characters … Good and evil, right and wrong are interwoven in this memorable novel from the New South.” —Lee Smith, author of The Last Girls

“The Promise of the Pelican is so much more than a suspenseful murder mystery. Roy Hoffman makes the reader care deeply about all the verities: courage, justice love. A thrilling novel, with characters as memorable as those of Shakespearean tragedy...I could not put it down.”—Sena Jeter Naslund, author of Ahab's Wife, Four Spirits

“Roy Hoffman casts his net wide in this masterful novel, set on Mobile Bay but reaching to the Netherlands and Honduras as well, all the while looking back to Nazi Germany and staring down the U.S./Mexican border. Hoffman is at the height of his powers, his language vigorous and transportive … This mystery, drama, literary marvel swept me up and would not let me go.”—Elaine Neil Orr, award-winning author of Swimming Between Worlds

“Hoffman’s narrative is a contemporary nod to the Harper Lee classic, To Kill a Mockingbird … The Promise of the Pelican is easily the front runner for the number one spot on my Top Ten list this year.”  —Heidi Slowinski, on behalf of the Jewish Book Carnival, Association of Jewish Libraries

“Though a murder is at the center of this masterly novel, Roy Hoffman is most interested in writing about people; the best of us and the worst of us … [He] weaves an extraordinary tale of people desperately trying to connect, trying to make sense out of the senseless, ultimately asking whether true justice is possible in an imperfect world.”—Charles Salzberg, twice Shamus nominated author of Second Story Man and the Henry Swann series

“Roy Hoffman secures his place alongside the great American writers from the Deep South … The story is compelling, the writing is elegant and economical, and every scene poignant and powerful. You can feel the heat of the Deep South, the tensions throughout, and the hope of a better world.”—Michael J. Gerhardt, distinguished professor at the University of North Carolina at Chapel Hill School of Law, and author of Lincoln’s Mentors:  The Education of a Leader

“With its extraordinary cast of characters, The Promise of the Pelican … is a character-driven page turner.” —Frye Gaillard, Mobile Bay Magazine

“The one thing we know about a Roy Hoffman novel is that it’s full of love and hope and generosity and spirit.” —Susan Larson, on “The Reading Life,” WWNO public radio, New Orleans.