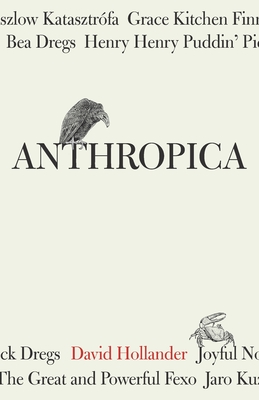 A Hungarian fatalist convinced that the human race is a blemish on God's otherwise perfect universe; a natural resource scientist who's discovered that we exhaust the earth's resources every eight days; an Ultimate Frisbee-playing man-child who's identified a fractal pattern embedded within all matter; a failing novelist desperate for the approval of those she despises; a paralyzed philosophy professor discovering that he can make things happen simply by wanting them badly enough; and a trio of vengeful, superintelligent robots locked in a hangar in South Korea, patiently waiting for some gullible human(s) to release them.

This is a partial cast of Anthropica, a novel that puts Laszlow Katasztr fa's beautiful vision of a universe without us to the test. Because even if Laszlow is merely, as he claims, an agent of fate, he's the one driving this crazy machine. And once he has his team assembled, he just might-against all odds and his own expectations-be able to see his apocalyptic plan to fruition.

David Hollander is the author of the novel L.I.E., a Young Lions Fiction Award Nominee. His work has appeared in McSweeney's, Conjunctions, Fence, Agni, Unsaid, The New York Times Magazine, and Best American Fantasy, among other reputable and disreputable publications. He lives in the Hudson Valley with his wife and two children and teaches writing at Sarah Lawrence College. Find out more about David at www.longlivetheauthor.com.

"Beneath the syntactical dazzle... Hollander sees like a visionary and he feels like an empath. Anthropica is more evidence of his tragic and tragicomic excellence." -- Rick Moody, Author of Hotels of North America and The Ice Storm

"Anthropica is that rare, category-defying book that is pure enchantment: structurally dazzling, philosophically profound, slyly funny, and stealthily moving." - Dawn Raffel, Author of The Strange Case of Dr. Couney and The Secret Life of Objects

"The rewards of Anthropica are many. The sentence-by-sentence beauty; the crisp creation of characters; the masterful interior voices; the fully imagined, willing world; the smooth soft underbelly of the story with its sparkling viscera hanging out. Plus, it's funny." - Jo Ann Beard, Author of Boys of My Youth and In Zanesville

"A majestic, mysterious artifact... a deeply felt and sometimes madcap Moebius strip of a book. Space-time, Earth-life, and human (and inhuman) desire and meaning have a worthy bard in David Hollander, and existence gets its dark, beautiful due in this rapturous work." -- Sam Lipsyte, author of The Ask and Home Land