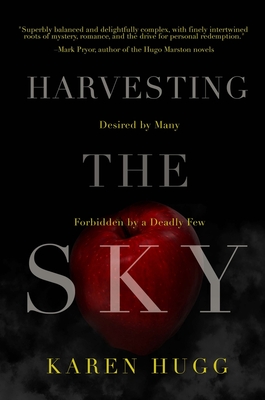 "Karen Hugg is the rare author who can blend wonder and suspense."

—Emily Carpenter, Author of Until the Day I Die, Every Single Secret, and Burying the Honeysuckle Girls

Botanist Andre Damazy lands on the opportunity of a lifetime when he discovers a rare medicinal apple in Kazakhstan and brings back tree cuttings to his hidden greenhouse in Paris. Growing the cuttings into trees is personal for Andre since the apples can heal people with serious illnesses, like his mother who’s suffered a stroke. But a mysterious stranger constantly thwarts Andre’s work, sending harassing calls and menacing effigies, stalking Andre, and vandalizing his trees. Andre doesn’t understand why anyone would do this, but he wonders if it’s related to a project from his past that went wrong and resulted in a deadly mistake. So with the help of his new friend Renia (The Forgetting Flower) and her street smarts, he works to outmaneuver his enemy while uncovering a larger, more dangerous plot that threatens the foundation of all that Andre holds dear, including the woman he secretly loves.

Harvesting the Sky is the second book in the Botanique Noire series which combines vivid literary prose and a thriller plot, while enticing readers with the wonder and magic of plants.

Karen Hugg is the author of The Forgetting Flower and Song of the Tree Hollow. Most of her stories are set in worlds where plants, real or imagined, affect people in strange new ways. Born and raised in Chicago, she later moved to Seattle and worked as an editor in hi-tech, which took her to live and work in Paris. Later, she became an ornamental horticulturalist and master pruner. She earned her MFA from Goddard College and has been published in Crime Reads, Thrive Global, The Big Thrill, the Rooted anthology, and Garden Rant. She has appeared on the New Books, Urban Farm U, and The Cave You Fear podcasts, along with the TV show New Day Northwest. For more information, visit www.karenhugg.com. She lives in Seattle, Washington.

"Hugg tells a captivating story in a novel brimming with elegant prose and lurking menace, and Paris feels as alive as the unique plants that make this book such an original delight." —Mark Pryor, author of the Hugo Marston mystery series

"Hugg, a certified horticulturist, displays her knowledge and skills with vivid descriptions of plants and cultivation. But her prose shines throughout, as she establishes an unsettling tone merely detailing the environment..." —Kirkus Review

"...It’s an engrossing novel, and the reader comes away breathless and possessing fresh knowledge of the plant world as well." —Sidney Williams, author of Fool’s Run