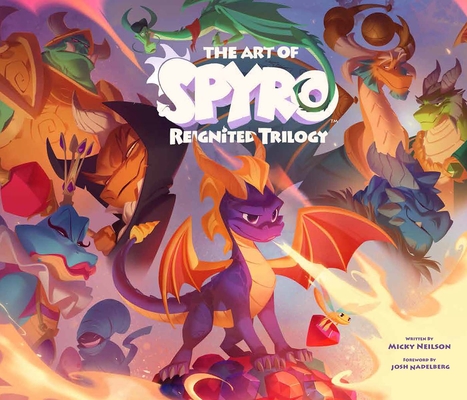 In 2018 Toys for Bob Studios thrilled fans worldwide by releasing Spyro(TM) Reignited(TM) Trilogy, a faithful remaster encompassing all three titles from the beloved Spyro(TM) trilogy introduced in 1998.
The Art of Spyro(TM) is a meticulously crafted compendium filled with in-depth behind-the-scenes content, insightful quotes from top illustrators in the industry, anecdotes from the game developers, and a dazzling assortment of incredible concept art, some of which has never been seen by the public. It is a must-have for art lovers, gamers, fans... and the fun-loving adventurer in all of us.

Micky Neilson is a two-time New York Times best-selling author whose graphic novels, Ashbringer (#2 on the list) and Pearl of Pandaria (#3) have both been published in six languages. As one of the first writers at Blizzard Entertainment, he has more than two decades of experience in the cutting edge of the gaming industry. In 2016 Riverdale Avenue Press published his memoir Lost and Found: An Autobiography About Discovering Family, available wherever books are sold. He has also self-published three horror novels in his original series The Turning, on Amazon. In 2017 Micky was tapped to write The Howling: Revenge of the Werewolf Queen, a comic book continuation of the beloved 1981 Joe Dante horror film The Howling. Also in 2017 Micky completed the Call of Duty Field Manual, a companion book to the best-selling video game Call of Duty World War II. Most recently, Micky has written his first original sci-fi novel, Ridgerunners, as well as co-writing the illustrated novel Strange Highways.