The Other Name: Septology I-II (Paperback) 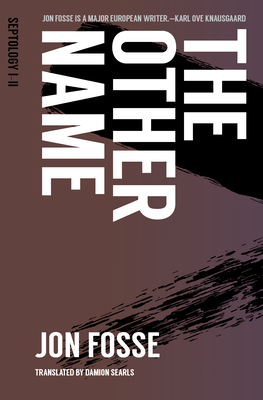 Jon Fosse's Septology cycle has been one of my most meaningful encounters of the pandemic. Hypnotic, soothing, intellectually reverent. Damion Searls is the perfect translator for Fosse's unending sentences, that repeat and circle back on themselves with mathematical beauty, creating some of the most significant literature I've read on alcoholism, faith, and artmaking I can remember. Septology could fill a hundred volumes, and I would read forever.

"Fosse's fusing of the commonplace and the existential, together with his dramatic forays into the past, make for a relentlessly consuming work: already Septology feels momentous."--The Guardian

The Other Name follows the lives of two men living close to each other on the west coast of Norway. The year is coming to a close and Asle, an aging painter and widower, is reminiscing about his life. He lives alone, his only friends being his neighbor, sleik, a bachelor and traditional Norwegian fisherman-farmer, and Beyer, a gallerist who lives in Bj rgvin, a couple hours' drive south of Dylgja, where he lives. There, in Bj rgvin, lives another Asle, also a painter. He and the narrator are doppelgangers--two versions of the same person, two versions of the same life.

Written in hypnotic prose that shifts between the first and third person, The Other Name calls into question concrete notions around subjectivity and the self. What makes us who we are? And why do we lead one life and not another? Through flashbacks, Fosse deftly explores the convergences and divergences in the lives of both Asles, slowly building towards a decisive encounter between them both. A writer at the zenith of his career, with The Other Name, the first two volumes in his Septology, Fosse presents us with an indelible and poignant exploration of the human condition that will endure as his masterpiece.

Jon Fosse is one of Norway's most celebrated authors and playwrights. He was born in 1959 on the west coast of Norway and is the recipient of countless prestigious prizes, both in his native Norway and abroad. Since his 1983 fiction debut, Raudt, svart [Red, Black], Fosse has written prose, poetry, essays, short stories, children's books, and over forty plays, with more than a thousand productions performed and translations into fifty languages.