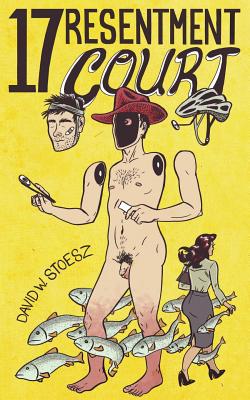 By David W. Stoesz, Marie Bouassi (Cover Design by)
$9.99
On our shelves now:

A professor is dead. So is the prep guy at East Sea Sushi.

A darkly whimsical crime thriller, 17 Resentment Court zips along through the alleys, bike paths, fancy homes, and corporate offices of the Northwest metropolis of Plankton.

A newcomer to the city, Pope Smith arrives with a broken heart and a bloodshot eye, a souvenir from an angry husband. "I offered to let him hit me in the face. I didn't know he would be so good at hitting."

Controlling his emotions through the practice of Business Yoga, and taking a job as a low-level grunt for a private detective, Pope soon finds himself impersonating his employer and doing a bit of burglary--an experience that fills him with bitchy disdain for the level of criminal sophistication in Plankton. "Not that I'm a criminal myself," says Pope. "Sure, I used to be part of what you might technically call a 'burglary ring.' But that's a misleading term."

Pope's connection with the murders is complicated by the arrival of his former burglary ring comrades, who are convinced he's withholding a pile of cash. With the occasional assistance of a skeptical office supply thief named Brenda, Pope tries to bullshit his way out of trouble as he finds himself increasingly unpopular with everyone he meets. Possibly because of his poor manners and bloodshot eye. "I doubt it though," says Pope. "Nothing but a bunch of cold fish in this town."

Situated firmly in the tradition of classic crime fiction, the novel delivers all the easy-to-read satisfactions of the genre while also appealing to the adventurous readers of Haurki Murakami, Neil Gaiman, Alice Hoffman, and Lorrie Moore.

"A dementedly funny noir, 17 Resentment Court is Philip Marlowe on psilocybin, channeled by Kafka and directed by Johnnie To." -Diane Sepanski

David W. Stoesz wrote the popular Seattle Weekly column "Ask an Uptight Seattleite," and is the author of A Sensitive Liberal's Guide to Life (Gotham, 2010). See davidwstoesz.com for buying and contact info.