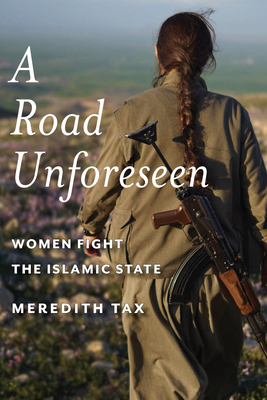 If you have any interest in the fight against totalitarian theocracy, then you must read A Road Unforeseen. I found it to be a thorough, well organized primer on Kurdistan, ISIS, and the self governing region known as Rojava. Meredith Tax is a phenomenal researcher, and makes this deeply complicated topic very readable. Still not convinced? THIS IS ABOUT WOMEN FIGHTING AN INSANE DEATH CULT.

In war-torn northern Syria, a democratic society--based on secularism, ethnic inclusiveness, and gender equality--has won significant victories against the Islamic State, or Daesh, with women on the front lines as fierce warriors and leaders.

A Road Unforeseen recounts the dramatic, underreported history of the Rojava Kurds, whose all-women militia was instrumental in the perilous mountaintop rescue of tens of thousands of civilians besieged in Iraq. Up to that point, the Islamic State had seemed invincible. Yet these women helped vanquish them, bringing the first half of the refugees to safety within twenty-four hours.

Who are the revolutionary women of Rojava and what lessons can we learn from their heroic story? How does their political philosophy differ from that of Iraqi Kurdistan, the Islamic State, and Turkey? And will the politics of the twenty-first century be shaped by the opposition between these political models?

Meredith Tax (September 18, 1942 - September 25, 2022) was an international women's rights activist and founding president of Women's WORLD, a global free speech network of feminist writers, as well as international board chair of the Centre for Secular Space and cofounder of the PEN American Center's Women's Committee and International PEN Women Writers' Committee. She was also a frequent contributor to The Nation and the author of many seminal books, including A Road Unforeseen: Women Fight the Islamic State.