Shopping Can Be Deadly (A Discount Detective Mystery) (Paperback) 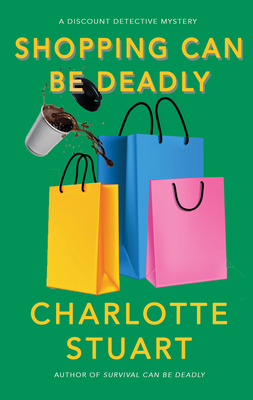 A shooter shatters the suburban calm in a mall . . .
Single mom, Cameron Chandler, an investigator with Penny-wise Investigations, a discount detective agency conveniently located in a suburban mall, is approaching her office when gunshots echo off the mall walls, and she sees a young man collapse just a few feet away. Chaos breaks out in the packed mall as people try to escape. Cameron kneels beside the gunshot victim and is grabbed from behind by a man she fears is the shooter. As he forcibly drags her toward the mall exit, she suddenly realizes who he is—Gary, a man who once saved her life.
Once outside, Gary admits that he was the shooter’s target. He and three associates had engaged in what they thought was a legitimate but secret operation only to find themselves caught in a quagmire of government intrigue and covert manipulation. She agrees to help by taking care of his dog while he investigates why someone is trying to eliminate them.
After Cameron agrees to foster Gary’s large dog Bandit, someone shows up at Penny-wise with a description of Bandit, claiming that he wants them to locate “his” dog and Cameron realizes that she and her family could be in danger.
Next, a woman claiming to be with the FBI wants to talk with Cameron about Gary, but her boss at Penny-Wise decides it’s time the agency steps in to investigate what’s going on.

In a world filled with uncertainty and too little chocolate, Charlotte Stuart has a passion for writing lighthearted mysteries with a pinch of adventure and a dollop of humor. Her first discount detective mystery, Survival Can Be Deadly, was a Foreward INDIES mystery finalist. The first in another series, Why me? Chimeras, Conundrums and Dead Goldfish, made the semi-finals for the Chanticleer Murder and Mayhem contest. She began her career in academia with a PhD in communications. Then, she and her husband decided to build a commercial boat and go fishing for salmon in Alaska. Currently she lives and writes on Vashon Island in Washington State’s Puget Sound and spends time each day entertained by herons, seals, eagles and other wildlife.

"Political campaigns can be brutal, and deadly. When a prank goes awry and a corpse turns up, CAMPAIGNING CAN BE DEADLY, the second installment on the “discount detective” series, is off and running and will lead the reader down a quirky, twisted pathway. Colorful characters, nimble dialog, and a fun story. Don’t miss it." --D. P. Lyle, author of Skin in the Game.

"[Campaigning Can Be Deadly] is a tale of good folks involved in others' bad behavior, and how it turns out just might surprise you." —Joe Kilgore, The US Review

"[Survival Can Be Deadly] is a unique story filled with mystery, a touch of romance, adventure and quite a bit of humor. The author introduces a quirky cast of characters and their dialogue fits the story perfectly." --Socrates' Book Reviews

"The solid mystery will keep the reader guessing as they follow Cameron and her colleagues through interviews and property searches, trying to uncover the true motive behind the mall shooter. This mystery will surely entertain readers who love down-to-earth characters, and dogs, of course" --Jennifer Shepherd, In D'Tale Magazine