Campaigning Can Be Deadly (A Discount Detective Mystery #2) (Paperback) 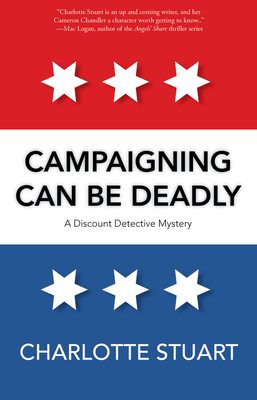 This is book number 2 in the A Discount Detective Mystery series.

When two investigators, Cameron Chandler and Yuri Webster, discover a body next to a pile of stolen signs, what began as a prank becomes a murder investigation. The local candidate for the U.S. Congressional seat gets all of the endorsements, but he can’t compete with the unlimited resources of his opponent. Funded by an east coast family in the oil business, the out-of-state candidate takes the state by storm, marrying the daughter of a local prestigious family and flooding the airwaves with ads, many of them negative. Cameron and Yuri soon find themselves targets in a battle between the local candidate, big oil interests, and anti-big oil activists.

"Political campaigns can be brutal, and deadly. When a prank goes awry and a corpse turns up, Campaigning Can be Deadly, the second installment on the “discount detective” series, is off and running and will lead the reader down a quirky, twisted pathway. Colorful characters, nimble dialog, and a fun story. Don’t miss it." —D.P. Lyle, MD, Award-winning Author of the Jake Longly and Cain/Harper Thriller Series