Survival Can Be Deadly: A Discount Detective Mystery (Paperback) 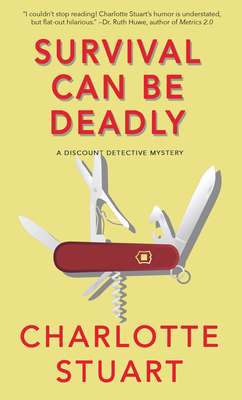 This is book number 1 in the A Discount Detective Mystery series.

When single mom and recent widow Cameron Chandler takes a much-needed job at Penny-wise Investigations, a detective agency conveniently located in a suburban shopping mall, she grabs the chance to reinvent herself. Her first case is to locate a runaway girl, something her predecessor had been pursuing before he disappeared. Following in his footsteps, the trail leads to a survivalist camp on a remote island in northern Puget Sound. Armed with only a Swiss Army Knife and her quirky on-the-job training as a suburban sleuth, Cameron uncovers more than she bargained for. She soon finds herself in a fight for her own survival in this lighthearted mystery set in Seattle and the San Juan Islands to the north.

In a world filled with uncertainty and too little chocolate, Charlotte has always anchored herself in writing. As an academic with a Ph.D. in communications, she wrote serious articles on obscure topics with titles that included phrases such as “summational anecdote” and “a rhetorical perspective.” As a commercial fisher in Alaska, she turned to writing humorous articles on boating and fishing. Long days on the ocean fighting seasickness required a little humor. Then, as a management consultant, she got serious again. Although even when giving presentations on serious issues she tried for a playful spin: Stress—Clutter and Cortisol or Leadership—Super Glue, Duct Tape and Velcro.

Her current passions include pro bono consulting for small nonprofits and writing lighthearted mysteries. A curious mix of problem solving: pragmatic and fantasy. Charlotte lives and writes on Vashon Island in Washington State’s Puget Sound and spends time each day entertained by herons, seals, and eagles and hoping the deer and raccoons don’t raid her vegetable garden.