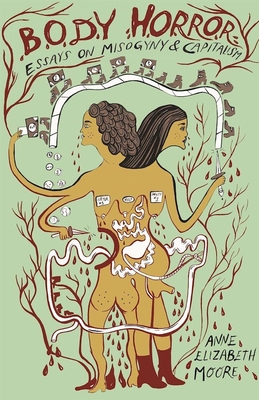 By Anne Elizabeth Moore
Unavailable at this time.
Out of print

This bitingly funny, stark book of feminist essays is like watching a patient, skilled boxer making a relentless assault in the ring. Moore's target is the intersection of capitalism and misogyny and its effects on women's bodies, from labor rights and healthcare to high fashion modeling. Her work is rooted in research and cultural criticism, and draws on her experiences as a journalist, disabled person, and comics anthologist. I don't read a lot of nonfiction, but lately I'm craving work like Moore's, which has no interest in sugarcoating anything but confronts the complexity of oppressive systems with blunt humor and equally complex analysis. My favorite essays in Body Horror? The patent history of tampon disposal boxes (trust me!), and the 19th century railroad magnate-origins of standardized time in North America.

Every day, heinous acts are perpetrated on women's bodies in this political economy--whether for entertainment, in the guise of medicine, or due to the conditions of labor that propel consumerism. In Body Horror: Capitalism, Fear, Misogyny, Jokes, award-winning journalist and Fulbright scholar Anne Elizabeth Moore explores the global toll of capitalism on women with thorough research and surprising humor. The essays range from probing journalistic investigations, such as Moore's reporting on the labor conditions of the Cambodian garment industry, to the uncomfortably personal, as when Moore, who suffers from several autoimmune disorders, examines her experiences seeking care and community in the increasingly complicated (and problematic) American healthcare system. Featuring illustrations by Xander Marro, Body Horror is a fascinating and revealing portrait of the gore of contemporary American culture and politics.

Anne Elizabeth Moore is the author of Unmarketable and Cambodian Grrrl, co-editor and publisher of the now-defunct Punk Planet, a founding editor of Best American Comics, a Fulbright scholar, former UN Press Fellow, and USC Annenberg/Getty Arts Journalism Fellow. She lives in Chicago.