The Bordeaux Kitchen: An Immersion into French Food and Wine, Inspired by Ancestral Traditions (Hardcover) 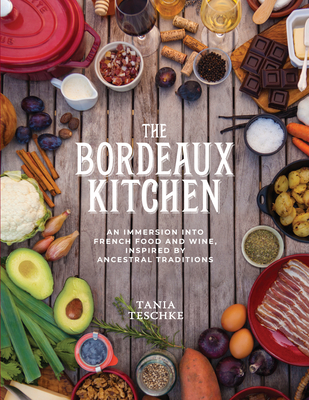 More than a cookbook, this is a comprehensive cultural and culinary journey into the world of traditional French cuisine and French wine (adapted for paleo enthusiasts), and tips for ancestral living. Author Tania Teschke, food and wine gourmet, photographer, and lifelong student of French culture, brings you over 160 sumptuous and easy-to-follow recipes for seasonal and traditional French dishes that deliver not only the nutrition, but also the satisfaction we have been missing in our modern diet. Tania takes you on a French culinary journey to reclaim your primal connections to food and health and to each other through personal stories, striking photography and colorful tutorials.

From classics like rich Beef Burgundy and succulent slow-cooked leg of lamb, to modern takes on nutrient-dense organ meats, the recipes from The Bordeaux Kitchen will bring the timeless wisdom of past generations to your cooking and meal planning. You’ll experience the beautiful simplicity of authentic French cuisine, gain a practical education about French wine (including wine pairing guidelines for each recipe!), and how to share a French-style meal with family and friends.

The Bordeaux Kitchen chronicles Tania’s journey through wine school in Bordeaux, a butchery apprenticeship, and the gathering of her vast treasure trove of recipes inspired by French chefs, friends and grandmothers. Tania transports you to the culinarily-rich French Southwest and demonstrates how “ancestral,” nutrient-dense, grain-free French recipes are optimal for nourishing your body and mind. Highlighting the latest research in ancestral health , The Bordeaux Kitchen enlightens you about the path to healing many modern-day, chronic maladies caused by nutrient-deficient diets. The Bordeaux Kitchen also serves as a practical guide to using the right kitchen tools for the disappearing arts of filleting a fish, carving a chicken, and rendering fat, and how to gain a thorough understanding of the various cuts of meat.

The beautiful illustrations and rich descriptive text will make you an expert in French wine and cuisine in no time—and keep you aligned with the primal/paleo/ancestral health principles that have exploded in popularity across the globe in recent years. Every home cook who loves food and sharing it with family and friends will be inspired by The Bordeaux Kitchen.

Tania Teschke is a writer and photographer with a passion for French cuisine and wine. American-born and globe-traveled, Tania lived for an extended period in France four separate times, for undergraduate and graduate studies, and immersions into French language and literature, and traditional French cooking from French chefs and friends. She apprenticed with an award-winning Basque butcher, and earned a diploma in wine science from the University of Bordeaux. Inspired by her French experiences, Tania began recording recipes and stories as a creative outlet and for the enjoyment and edification of her daughters. Over several years, this knowledge and experience evolved into a comprehensive masterwork of recipes, French culture and healthy living that she titled, The Bordeaux Kitchen.

Tania's travel photography has been exhibited in Paris, Tokyo, and Moscow and has appeared in The New York Times and other international publications. She interned with legendary National Geographic photographer Steve McCurry in New York. She has previously worked with children’s book publisher Scholastic and in conservation with World Wildlife Fund in Washington, DC and Frankfurt.

Tania’s passion for health and nutrition was sparked by her experience with a ruptured appendix while working in Kazakhstan in her 20s. Her life-threatening illness resulted in numerous complications and health challenges that were poorly addressed by traditional medicine, inspiring her to look for answers through dietary modification and healthy exercise and lifestyle practices.

Tania earned a B.A. from Brown University and an M.A. from The Fletcher School at Tufts University. Tania speaks French, German and Russian. Still a global nomad with her diplomat husband and two daughters, Tania currently lives in Switzerland and enjoys hiking in the Alps with her family and cooking them nutrient-dense meals.