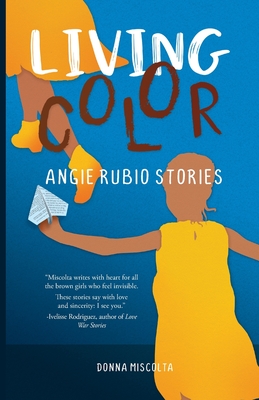 We first meet Angie Rubio at age five, being scolded by her kindergarten teacher for not knowing how to skip properly.

Set in California in the 1960s and '70s, Guided Tours in Living Color takes Angie year by year from kindergarten through high school, offering a portrait of the artist as a shy, awkward Mexican-American girl.

Taking place against the backdrop of the Cold War and civil rights eras--the Cuban missile crisis, the Watts riots, Beatlemania, the Black Power salute at the 1968 Olympics--Guided Tours in Living Color also surveys the milestones of American girlhood. We see Brownies, slumber parties, training bras, cheerleader tryouts, and proms through the eyes of a "brown, skinny, and bespectacled" Latina who soon learns that pageant winners as well as high school cheerleaders are always white.

Angie is relegated to the fringes of the popular cliques at school, led by opinionated girls whose self-confidence seems as unattainable to her as their perfect teeth and blonde hair. But Angie resists internalizing societal messages about who is beautiful, important, and valid. When a white classmate is cast as Juliet in the school play, she can't resist taunting Angie with "Don't forget who the heroine of this play is," to which Angie replies: "She dies in the end."

In "the unfun funhouse that was high school," Angie decides to reinvent herself. Reminding herself to "be bold, be heard, be provocative," she writes articles for the student newspaper raising critical questions about venerable institutions like homecoming, prom, and the tradition of naming students "most likely to succeed," "best looking," and so forth.

Guided Tours in Living Color traces Angie's formation as a writer, from the child who loves Scrabble and jots down new words she learns in a notebook to the teenager publishing controversial opinions about success and belonging, a person whose voice is now "loud-enough-to-be-heard."