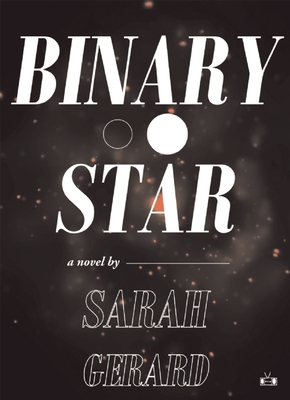 By Sarah Gerard
$16.00
Unavailable at this time.

Partially a meditation on addiction and partially an astronomy lesson (*also partially a road trip novel, of sorts), this stream of consciousness novel is an absolute gut punch of a read. Tackling heavy subjects like anorexia/bulimia, alcoholism, obsession with celebrity, big-agriculture/big-pharma. An excellent debut novel.

Rhythmic, hallucinatory, yet vivid as crystal. Gerard has channeled her trials and tribulations into a work of heightened reality, one that sings to the lonely gravity of the human body. --NPR

With luminous, lyrical prose, Binary Star is an impassioned account of a young woman struggling with anorexia and her long-distance, alcoholic boyfriend. On a road-trip circumnavigating the United States, they stumble into a book on veganarchism, and believe they've found a direction.

Binary Star is an intense, fast-moving saga of two young lovers and the culture that keeps them sick (or at least inundated with quick-fix solutions); a society that sells diet pills, sleeping pills, magazines that profile celebrities who lose weight or too much weight or put on weight, and books that pimp diet secrets or recipes for success.

The particular genius of Binary Star is that out of such grim material in constructs beauty. It's like a novel-shaped poem about addiction, codependence and the relentlessness of the everyday, a kind of elegy of emptiness. --New York Times Book Review

Sarah Gerard is the author of the essay collection Sunshine State, a New York Times critics' choice, the novel Binary Star, a finalist for the Los Angeles Times first fiction prize, and two chapbooks. Her short stories, essays, interviews, and criticism have appeared in The New York Times, Granta, The Baffler, Vice, BOMB Magazine, and other journals, as well as anthologies. Her paper collages have appeared in Hazlitt, BOMB Magazine, Epiphany Magazine, No Tokens Journal, and the Blue Earth Review. Recycle, a book of collages and text co-authored with the writer and artist Amy Gall, was published by Pacific in 2018. Her column Mouthful, published by Hazlitt, explored her relationship with food ten years into recovery from anorexia. She's been supported by scholarships and fellowships from Yaddo, Tin House, PlatteForum, and Ucross.