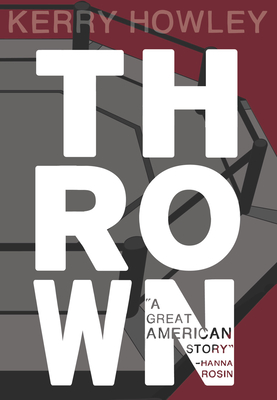 Never. I never ever thought I would read a book about Mixed Martial Arts fighting... cage fighting if you need a visual. It's violent and dangerous, and in my opinion just stupid. But then there was this book; a world-expanding read about philosophy and obsession, failure and hope. And yes, cage fighting.

While bored out of her mind at a writing conference Kerry Howley decides to follow a group of men who lead her to a makeshift fighting octagon in the conference hotel. It is here she witnesses her first MMA fight and undergoes a transcendent experience that she doesn't understand, but longs to replicate. That night she meets one to the two fighters she will follow over the course of the next three years. Inserting herself into their lives as a "spacetaker," Howely chases that unexplained otherworldly feeling while her fighters chase dreams of glory, fame, and brotherhood.

This book is wild. I learned more about MMA and phenomenology than I ever thought I wanted to (not that I actually thought about those things until now). It's absurd, and smart, and sad. In a word--captivating.

In this darkly funny work of literary nonfiction, a bookish young woman insinuates herself into the lives of two cage fighters--one a young prodigy, the other an aging journeyman. Acclaimed essayist Kerry Howley follows these men for three years through the bloody world of mixed martial arts as they starve themselves, break bones, fail their families and form new ones in the quest to rise from remote Midwestern fairgrounds to packed Vegas arenas. With penetrating intelligence and wry humor, Howley exposes the profundities and absurdities of this American subculture. Kerry Howley's work has appeared in The Paris Review, New York Times Magazine, the Atlantic, Wall Street Journal, Slate, and frequently in Bookforum. She holds an MFA from the University of Iowa's Nonfiction Writing Program.

Kerry Howley: Kerry Howley's work has appeared in The Paris Review, The New York Times Magazine, The Atlantic Monthly, The Wall Street Journal, Slate, and frequently in Bookforum. She holds an MFA from the University of Iowa, where she was an Arts Fellow and the Provost's Visiting Writer in Nonfiction.