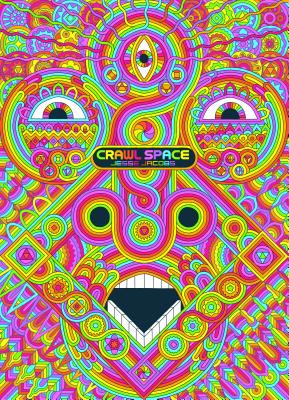 Psychadelic surrealism meets high school drama in this story of teenage friendship and paradise found and lost in a basement washing machine. Full of deadpan humour and delightfully weird visuals!

In the basement, through the appliances and past the veil that separates realities, lies a rainbow-hued world where a group of kids have found retreat from their suburban mundanity with a coterie of iridescent creatures. But in the fraught realm of adolescence, can friendship survive the appeal of the surreal?

Jesse Jacobs was born in Moncton, NB, and now draws comics and things from his home in Hamilton, ON. In 2009, his books Small Victories and Blue Winter were short listed at the Doug Wright Awards for Canadian Cartooning. He received the Gene Day Award for Canadian Comic Book Self-Publisher of 2008. Even the Giants (AdHouse, 2011) marked his major publishing debut after several award-winning, self-published titles, and his work has appeared in the acclaimed Latvian comics anthology's , as well as the 2012 edition The Best American Comics edited by Fran oise Mouly and published Houghton Mifflin Harcourt. He made his debut with Koyama Press in 2012 with the psychedelic creation myth By This Shall You Know Him, which was followed by the trippy take on nature versus nurture, Safari Honeymoon in 2014.