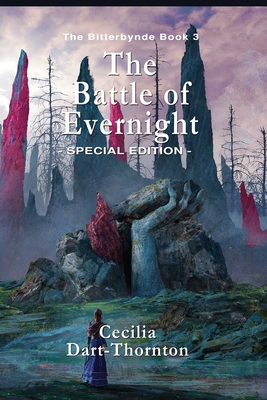 This is book number 3 in the Bitterbynde Trilogy series.

The Bitterbynde #3 THE BATTLE OF EVERNIGHT - Special edition, revised and extended, including an extra chapter. An ancient secret is about to be revealed... The fugitive who calls herself Tahquil has at last discovered the truth. She is being hunted down because of the secret she alone knows. However her mind is still clouded by a potent spell called the Bitterbynde, and she is also dying from a strange wasting disease, whose cure is elusive... Disaster strikes and she finds herself in Evernight - at the fortress of the Raven Prince himself. Faerie creatures of every kind - virtuous and wicked, solitary and trooping, monstrous and marvellously beautiful, become locked in a battle that could engulf all of Erith. Tahquil's quest for the truth finally hinges on a desperate choice. If she reveals that which is hidden, will she thereby save two worlds - or instead destroy everything she holds dear?