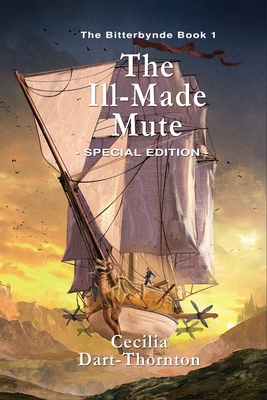 This is book number 1 in the Bitterbynde Trilogy series.

THE ILL-MADE MUTE - SPECIAL EDITION The Bitterbynde Trilogy #1 Revised and extended, with extras never before published, including information about Ms Dart-Thornton's life as an author and fragments of her unpublished juvenilia. 'The Stormriders land their splendid winged stallions on the airy battlements of Isse Tower. Far below, the superstitious servants who dwell in the fortress's lower depths tell tales of wicked creatures inhabiting the world outside, a world they have only glimpsed. 'Yet it is the least of the lowly - a mute, scarred, and utterly despised foundling - who dares to scale the Tower, sneak aboard a Windship, and then dive from the sky. 'The fugitive is rescued by an adventurer who gives it a name, the gift of communicating by handspeak, and an amazing truth, never guessed. Now Imrhien begins a journey to distant Caermelor, seeking a wise woman whose skills may be lifechanging. Along the way Imrhien must survive a wilderness of endless danger. For the hearthside tales are all true. The unhuman wights are real in all their legions. They haunt every pool, every turn in the road, and threaten and torment all travelers.' Author Cecilia Dart-Thornton was discovered on the Internet. She had written the three books of the Bitterbynde Trilogy before she uploaded the first chapter to a Writers' Workshop, where her work was spotted by an editor. Shortly afterwards Time-Warner's publishing department (New York) offered her a contract. They published her books in hardcover, the first time they had ever done so with a new author. The Bitterbynde Trilogy hit the best-seller lists world-wide and has been translated into five languages.