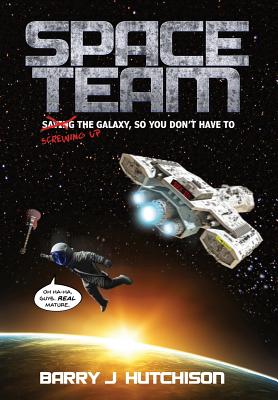 The galaxy's only hope is completely hopeless.

When small-time conman, Cal Carver, finds himself imprisoned and forced to share a cell with a semi-naked cannibalistic serial killer, he's pretty sure his day can't get any worse.

It isn't until two-thirds of the human race is wiped out and Cal is mistakenly abducted by aliens that things really start to go downhill.

Whisked across the galaxy, Cal is thrown into a team of some of the sector's most notorious villains and scumbags and tasked with delivering a package to a warlord-run solar system where the authorities dare not venture.

The mission should be simple enough, but as one screw-up leads to another the ragtag group of unwitting heroes find themselves in a frantic battle to save an entire alien civilization - and its god - from total annihilation.

Featuring epic space battles, unforgettable characters, and a shapeshifting blob with the face of Tobey Maguire, Space Team is the first book in the internationally bestselling series by award-winning author, Barry J. Hutchison, and is perfect for fans of Hitchhiker's Guide to the Galaxy, Galaxy Quest, Guardians of the Galaxy, and pretty much anything else with the word 'Galaxy' in the title.*

*Except maybe Samsung's Galaxy S series, which is a range of mobile phones, and so not really all that similar.