What Not: A Prophetic Comedy (Paperback) 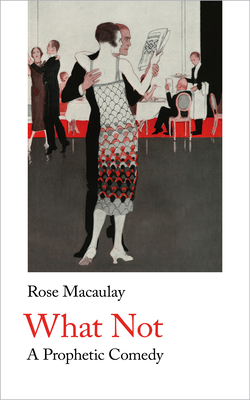 By Rose Macaulay, Sarah Lonsdale (Introduction by)
$17.99
Out of stock, usually available in 3-10 days

Hastily withdrawn from publication shortly after its controversial release in 1918, only to be reissued in 1919, What Not's initial momentum was squashed. Now republished for the first time with the suppressed pages reinstated, What Not is a lost classic of feminist protest at social engineering, and rage at media manipulation.

Kitty Grammont and Nicholas Chester are in love. Kitty is certified as an A for breeding purposes, but politically ambitious Chester has been uncertificated, and may not marry. Kitty wields power as a senior civil servant in the Ministry of Brains, which makes these classifications, but does not have the freedom to marry who she wants. They ignore the restrictions and carry on a discreet affair. But it isn't discreet enough for the media: the popular press, determined to smash the brutal regime of the Ministry of Brains, has found out about Kitty and Chester, and scents an opportunity for a scandalous exposure.

Aldous Huxley was a frequent guest at Macaulay's flat while she was writing What Not. Fourteen years later, his Brave New World borrowed many of Macaulay's ideas for Huxley's own prophetic vision.

Emilie Rose Macaulay (1881-1958) was a British novelist, journalist, cultural commentator, biographer, critic and early adopter of radio as a broadcaster and a writer. She was the first fiction reviewer for the feminist weekly Time and Tide in the 1920s, also writing for Good Housekeeping, and was celebrated for her acerbic and witty satires. In the First World War she worked as a Land Girl and a censor, and in the Second World War she drove ambulances and was bombed out of her apartment, losing all her possessions including her letters from her recently dead secret lover, the former Irish priest Gerald O'Donovan, for two of whose children she was godmother. She was made a Dame by Queen Elizabeth II for services to literature in 1958. Her most famous novel, The Towers of Trebizond (1956), is famous for having brought many wavering Anglo-Catholics back to the Church. She did not marry, adored parties and was a notoriously bad driver.