Little Book of Weed: A Guide for the Curious and the Connoisseur (Hardcover) 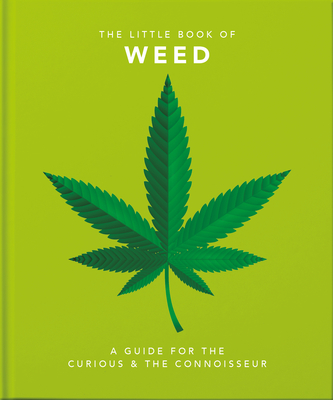 This is book number 2 in the Little Book Of... series.

Bill Hicks asks: 'Why is marijuana against the law? It grows naturally upon our planet. Doesn't the idea of making nature against the law seem to you a bit... unnatural?'

The Little Book of Weed looks at marijuana use from its first ever references to parents naming their children after their favorite varietals and asks the same question. Ganja, weed, cannabis, Mary Jane, blunt, chronic. The list of nicknames for marijuana is as numerous and varied as the users it appeals to. Grown in fields and hotboxes around the world, weed's influence on culture is far beyond teenagers trying pot for the very first time or chronic hippies fully immersed in the lifestyle. Howlers from politicians struggling to balance reality with perception, hilarious stand-up comedians in smoke-filled clubs, musicians whose albums defined eras and movies that put it all on film owe much of their infamy to the infamous herb. So sit back, chill out and roll up roll up for the Little Book of Weed as it emblazons the leafs.

'Herb is the healing of the nation, alcohol is its destruction.' Television interview with Bob Marley.

'When I was a kid, I inhaled, frequently. That was the point.' Barack Obama, when running for president in 2008.

'After 25 years of being fake weed dealers, it feels nice to be real weed dealers.' Kevin Smith on the launch of three new varieties of 'Snoogans' weed ahead of the long-awaited launch of the Jay and Silent Bob sequel, The Hollywood Reporter, 2020.